Measles virus is a member of the family Paramyxoviridae that causes an epidemic disease with worldwide distribution, with the main symptom of this systematic disease being a prodrome of fever and a pathognomonic enanthema (Koplik spots), followed by a maculopapular rash. The rash usually appears about 14 days after the patient’s exposure and even though vaccination has led the virus to be limited to preschool children and young adults, measles infection can cause severe and even fatal complications in adults, pregnant women and immunocomprised patients. The aim of this article is to highlight the dangers of measles outbreak during a possible crucial and hazardous period for both the mother and the fetus, and to suggest possible management and treatment options during gestation.

Measles Virus (MV) represents an extremely contagious virus that is being associated to many fatal diseases in a global range. The measles virus is spread by direct contact with infectious droplets or by airborne spread. The initial contamination from the virus takes place in the respiratory system where the virus is inserted in the local lymphomas and then carried to the lymph nodes, where it multiplies1, 2.

Infected monocytes and lymphocytes carry the virus through the blood circulatory system in many parts of the body, while the lymphoid tissues and organs represent the main place where the virus is being multiplied. In addition, the virus is possible to be detected and to affect other body parts as well, such as skin, conjunctivitis, lungs, gastrointestinal tract, liver, kidney and genitals. As soon as the infection of the sensitive cells is done, the measles virus causes the fusion of these cells, which leads to the formation of multicore giant cells, that are the characteristic result of the measles infection3, 4.

The description of the virus

Measles belongs to Morbillivirus genus within the Paramyxoviridae family and it is a spherical-shaped virus enclosed in a lipid-containing envelope derived from the host cell. Measles virus consists of a helical nucleocapsid, 100-300 nm in diameter, which has single stranded RNA as genetical material of approximately 16.000 bases, that directly begins copying the viral genome by the time the virus enters the host’s cells3. Specifically, the viral genome of the measles virus codes 8 different proteins which are needed for the formation of the virus as well as for its infectiveness.

Two of these, glycoprotein Hemagglutinin H and Fusion F, are found embedded in the viral file and mediate to the adhesion with host cellular receptors, by inducing virus fusion with target cells or fusing infected cells with healthy neighboring host cells. The third protein, protein M, interacts with the viral membrane and the ribonucleoprotein (RNP) complex and is responsible for the fitting and tagging of the virus in the host cells5. There are also two proteins polymerases, the major L and the phosphoprotein P, that are closely linked to the viral genome encapsulated within the nucleocapsid containing the nucleocapsid protein N.

Finally, the virus includes proteins V and C. These two viral proteins are non-structural, and their role is related to the suppression of the host’s immune system, thereby promoting the infectivity of the measles virus. The viral envelope is formed by the interaction of hemagglutinin protein (H), fusion protein (F), and matrix protein (M) with lipids from the host cell membrane6.

There are three distinguished stages of the disease: the precursor (bluish), the rash and the stage of remission. The precursor (bluish) stage lasts 2-4 days and is characterized by fever, severe bluish symptoms (lacrimation, rhinorrhea, sneezing), cough, conjunctivitis and photophobia. One to two days before or after the onset of the rash, Koplik’s patches appear which are pathognomonic in the disease and are small white spots surrounded by red halo and are located in the mucous membrane of the cheek corresponding to the lower molars. The eruptive stage lasts for 5-6 days and is characterized by an eruption of maculopapular rash which is initially sparse, pink and the elements are clearly excommunicated with each other and then become red and flutter but still are excommunicated amongst them with healthy skin. The eruption of the rash happens through thrusts and usually begins behind the ears, rapidly spreading to the face, torso and limbs. The stage of recovery is characterized by the drop of fever and the extinction of the rash gradually corresponding to the eruption, i.e. it fades firstly from the face and finally from the limbs. In some cases, a thin skin exfoliation appears except from palms and soles7,8.

Measles is a respiratory infection usually affecting children under-five years of age. It contributes significantly to childhood morbidity and mortality globally9. In many European countries there has been an outbreak of measles which is still in progress. During 2016-2017 period there have been recorded more than 19.000 cases all over Europe (30 EU Member States) and 44 deaths. According to a survey published in May 2011, more than 17,000 cases of measles have been reported in France between January 2008 and April 2011, including 2 deaths in 2010 and 6 deaths in 201110. European outbreaks in general have also been blamed for the occurrence of further small outbreaks in the US, where 40 separate imports from Europe were reported between 1st of January and 20th of May11,12.

Between 1st of January and 25th of April 2008, a total amount of 64 confirmed cases of measles were reported in the United States by the Centers for Disease Control and Prevention (CDC), the highest incidence ever recorded for each year since 2001.

Out of the 64 cases, 54 were related to the importation of measles from other countries into the United States, and 63 out of 64 patients were not vaccinated or they did not know if they had been vaccinated in the past11,12.

In the year 2013, many outbreaks of measles were reported around the world, most notable being Swansea (UK) where 1.400 children were affected and Northern England with 1000 cases. Europe has been experiencing frequent outbreaks since 2011 mostly in France, Ukraine and Romania. From January 2016 until the 6th of October 2017, Romania has reported 9.539 cases, including 34 deaths. 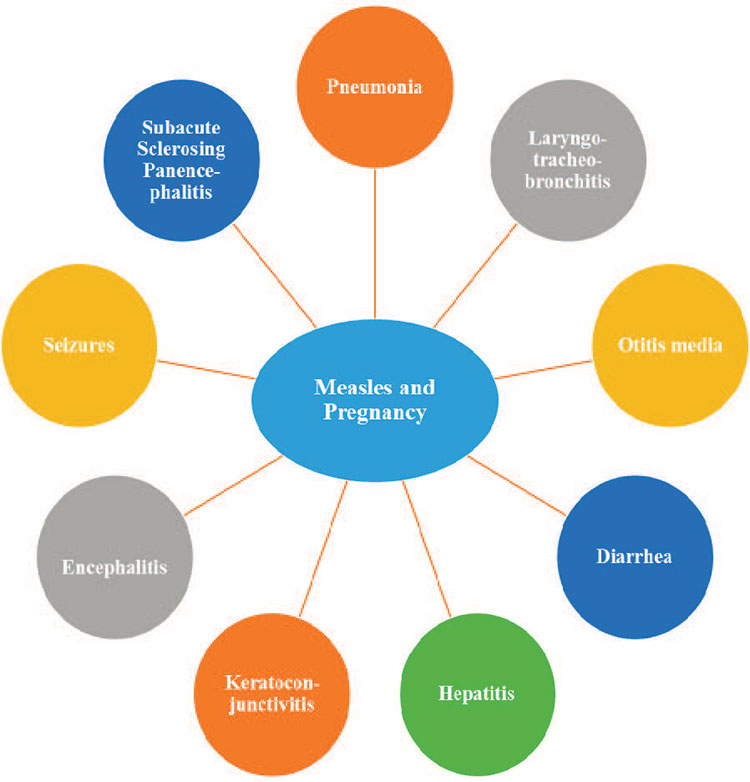 Measles is a degenerative disease responsible for more than 100,000 deaths every year, that targets the central nervous system and is characterized by intellectual decline and abnormal behavior, followed in severe stages by seizures, dementia and even death14,15. All effects can occur on average 4–10 years after acute measles illness, although latency periods have ranged from less than a year to several decades. Incidence has been estimated to be 4–11 cases per 100,000 cases of measles16. The most frequent complications were reported in the 35.1% (n = 1,571) of cases.  Diarrhea was the most frequent complication (16.0%; n = 717 cases) followed by stomatitis (13.9%; n = 622), keratoconjunctivitis (9.3%; n = 418), hepatitis (8.7%; n = 391), pneumonia (7.8%; n = 349), respiratory insufficiency (6.3%; n = 282), otitis media (4.6%; n = 206), thrombocytopenia (3.2%; n = 143), seizures (0.2%; n = 11), and other complications (2.9%; n = 129). The highest frequency of complications (38.5%; n = 1,180) was observed in the group age over 20 years old17. In a gender-wise analysis it appeared that males were affected more than females. As females were more commonly affected than males revealing that the disease has no gender specificity. The higher number of males being affected can be due to the outbreak occurring in the hostels18. Pregnancy is a critically important state for any women in her life time. The good outcome of pregnancy is a triumph not only for the mother but also for the people around. Various infections during this period can lead to adverse outcomes such as congenital anomalies, intrauterine growth retardation; low birth weight may even lead to fetal loss19.

Maternal viral infection can have an adverse impact on fetal survival. Generally, any illness and high fever in the mother can cause premature labor and delivery. Especially pregnant women are at increased risk for measles-related complications, including adverse pregnancy outcomes20,21.

Pregnant women infected with measles are at greater risk of being hospitalized, develop pneumonia and other fatal complications than non-pregnant women. A measles outbreak in Greenland in 1951, before the measles vaccine was available, had higher mortality frequency in pregnant, compared than non-pregnant22. Adverse pregnancy outcomes, such as pregnancy loss, preterm birth, and low birth weight, are also related to maternal measles; however, the risk of congenital defects does not appear to be increased. Treatment is exclusively supportive, because there is no antiviral treatment23. Fever and elevated liver enzymes were also more common to the pregnant women with measles than to non-pregnant women. Infection during pregnancy increases the risk of spontaneous abortion, preterm birth, and low birth weight24.

Transmission of measles virus from a pregnant woman to her fetus (congenital measles) has been reported in neonates born to women who had measles within 10 days of delivery25,26. Congenital measles is defined as presence of the rash at birth or within the first 10 days of life (this early timing excludes transmission from mother to newborn post-delivery) in a newborn whose mother was infected with measles late in pregnancy16. Infants who develop congenital measles are at increased risk for mortality and for subacute sclerosing panencephalitis, which is more common when measles is diagnosed in infancy. In a case series in Greenland of 300 live born neonates prenatally exposed to measles in 10 epidemics during the period from 1951–1962, eight (2.7%) had congenital malformations. The rate was not higher than expected27,28. Limited data are available regarding whether well neonates born to mothers who are ill with measles need to be separated from their mothers.

Recommendations to pregnant women without evidence of measles immunity who are exposed to measles:

Measles can become an extremely serious and severe disease for people with nutrition-hydration problems and immunocompromised patients (HIV, leukemia, malignancy or radiotherapy). Unvaccinated individuals have a high probability of infection when exposed to the virus. Because of their increased risk for measles-related morbidity and mortality, pregnancy is a special situation that requires attention. Pregnant women, without evidence of measles immunity, who are exposed to measles should receive intravenous immune globulin at a dose of 400 mg/kg within 6 days of exposure. Intravenous administration is recommended so that doses are high enough to reach levels of measles antibodies expected to be protective. A rapid IgG antibody test can be used to document measles immunity, provided that immune globulin administration is not delayed20,29. The only effective way to treat measles seems to be vaccination. The vaccine, was released in 1971 and protects against three diseases, Measles, Mumps, & Rubella (MMR vaccine). It consists of inactivated live measles virus strain and is administered subcutaneously or intramuscularly and women are advised to avoid pregnancy within 4 weeks after receiving the vaccine due to potential risk of adverse outcomes for both the mother and the fetus19. Τhe measles vaccine is also contraindicated during pregnancy. Although there is insufficient evidence of teratogenicity or other damage caused by measles virus to the fetus during the first trimester of pregnancy, these data cannot be ruled out30,31 [Table 1].

In case of vaccination in unknown pregnancies, women should be counseled about the theoretical risk of congenital rubella syndrome associated with receiving a rubella-containing vaccine even though, studies on neonates born to women who have inadvertently received MMR vaccination during pregnancy have not shown an increased risk of adverse outcomes23.

The main reason for measles outbreak seems to be a group of measles-sensitive individuals which claim and support the avoidance of measles-mumps-rubella (MMR) vaccine. Except from severe monitoring, the vaccination of pregnant women and women who are of childbearing age should be mandatory serving many purposes. Except from protecting both the mother and the fetus, vaccination offers a supplementary protection of high-risk groups against the virus, contributing to the health of the overall population. It is certain that by eliminating diseases such as measles, pox and rubella, a great concern during pregnancy will be elucidated and a great financial benefit will be achieved. Therefore, all countries should give great attention to the implement of the vaccination in order minimize or even eradicate diseases and ensure the least possible complications during pregnancy.

The authors report no conflict of interest