Pemphigus vulgaris (PV) is an autoimmune, bullous, mucocutaneous and potentially life-threatening disease. During pregnancy the occurrence of PV is exceedingly rare and its condition will become more complicated due to different mother’s hormone level and the effect of treatment on both mother and her fetus. PV may be associated with an adverse outcome, such as fetal growth restriction and preterm births. We report a case of a 33-year-old woman who was firstly diagnosed with PV during pregnancy. Treatment of highdoses systemic corticosteroids was instituted to control the disease. She delivered a healthy live preterm baby, appropriate for gestational age with no skin or mucosal lesions or other apparent complications.

Pemphigus vulgaris is an extremely rare autoimmune, mucocutaneous blistering disease. There are mainly three types of pemphigus: Pemphigus vulgaris (PV), Pemphi-gus foliaceus (PF), and other variants of pemphigus. PV produces blisters in skin and mucous membranes, while pemphigus foliaceus involves skin only, paraneoplastic pemphigus  produces blisters  in patients with underlying malignancy1. The patho-genesis of pemphigus vulgaris is associated with autoantibodies directed against transmembrane glycoproteins of desmosomes, which causes the formation of Dsg3-depleted  desmosomes in PV and loss of cell–cell adhesion in the basal and suprabasal layers of the deeper epidermis, with keratinocytes in the superficial layers of the epi-dermis maintaining their cell adhesion. This leads to intercellular edema with loss of intercellular attachments in basal layer and suprabasal epidermal cells separate from basal cellsto form clefts and blisters2.

It usually affects the elderly, between 5th and 6th decade of life and genetics seem to play an important role. Although all races are affected, Jews are more susceptible. It is common in eastern countries like  India, Malaysia  and China  and rare in west3. The occurrence of PV in pregnancy is very rare. PV in females may be associated  with other autoimmune diseases and infertility4. Impact on the fetus may be  due to the disease by itself or because of the effect of treatment given to the mother5. Litera-ture review on pemphigus in pregnancy is limited to 47 cases, reported between 1966 and 2014, with diagnosis before or during pregnancy6. The neonatal pemphigus is a very rare complication and there are only 29 reported cases on literature review7. Mortality rates associated with PV have decreased to 10% -15% with systemic corticos-teroids from a mortality rate as high as 70% in the precorticosteroid era8.

A 33-year-old albanian national, tertigravida (G:3,P:2) with no known chronic illness or medication use, presented at her 23rd week of pregnancy with widespread blistering dermatitis in the abdomen with associated burning and pruritus and erosions over the buccal mucosa. On examination, there were multiple ruptured blisters in the abdo-men, a singleton fetus with cephalic presentation and appropriate weight for the week of gestation and rest of the examination was normal. 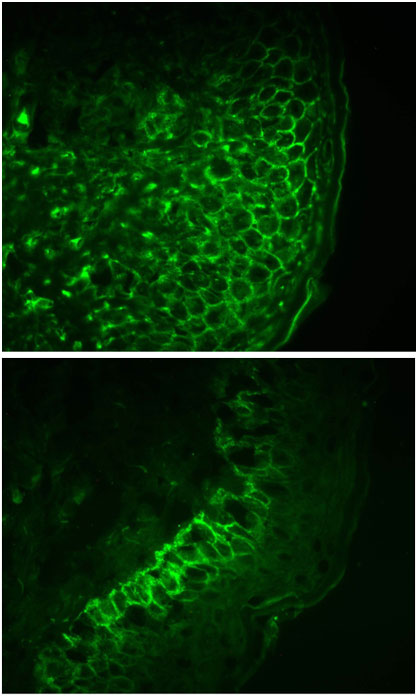 Figure 1,2. Immunofluorescence showed diffuse intercellular IgG in the epidermidis and basal intercellular C3, which confirmed the diagnosis of PV.

After discussions with the patient about possible adverse effects to the fetus, treatment of high-doses systemic corticosteroids was instituted to control the disease, in collaboration with dermatologists. Possible alteration of the course of pemphigus due to the hormonal and immunologic changes seen in pregnancy was considered before starting the treatment. Due to  the  severity of the disease she was  hospitalized. Pred-nisolone 0,7 mgr/kg  iv daily was initiated from 23 weeks to 28 weeks of gestation with satisfactory clinical response during the first month. Oral ulcers improved, lesions on the abdomen started healing and began to dry up.

Pemphigus is expressed by extensively distributed bullae and erosions on the skin and mucosa membranes. Pemphigus vulgaris during pregnancy is extremely rare because it is associated with infertility when it is active4.

Pemphigus and pregnancy interact with each other making treatment more complicated for the clinician. The appropriate treatment in pemphigus vulgaris patients during pregnancy is glucocorticoids and it is similar to the treatment without pregnancy9. In our case, prednisolone (FDA pregnancy category C) was administered, which can be relatively safely used as immunosuppressive drug during pregnancy as it does not readily cross the placenta and is partially inactivated as it cross the placenta10. Prednisolone is safer drug compared with other less used glucocorticoids such as dexamethasone and betamethasone. It should be avoided, if possible, during the first trimester, when risk for defects of the hard palate are highest11, 12. In our case 6 weeks after treatment, there was remission of the disease with no presence of new clinical-skin manifestations and the disease was slightly aggravated postpartum. The disease is exacerbated most commonly during the first, second trimester, and postpartum, and is stable during the third trimester. This could be due to the increased level of endogenous corticosteroid hormone chorion of the placenta and consequent immunosuppression13. Ιn our patient, there was postpartum aggravation of the disease, which is consistent with some studies that report the postpartum flare up of pemphigus vulgaris due to the rapid decrease of corticosteroid hormones levels4.

Treatment is often required to control both maternal disease and fetal outcomes. PV may be associated with an adverse outcome, such as fetal growth restriction , intrauterine death, premature delivery, and in approximately 30% neonatal PV of the newborns14. Neonatal pemphigus is caused by the transplacental transmission of antibodies, and only a small amount of immunoglobulin G (IgG) is synthesized by the neonate itself15. Poor outcomes have been related with inadequate maternal disease control and higher Dsg antibody titers from maternal serum or umbilical cord blood16. In our case, PV was well controlled and the mother gave birth to a premature , otherwise healthy neonate that showed no skin or oral-mucosa lesions or anomalies .

Typical complications observed in these PV patients are skin infections, sepsis, hypoka-lemia, hypoalbuminaemia and Cushing’s syndrome due to prolonged steroids usage. She developed postpartum endometritis and skin infections many times and was treated with antibiotics. Our patient is totally treated for 5 months and is still under follow-up.

Pemphigus vulgaris in pregnancy is very rare and treatment guidelines have not yet been clarified, thus, management of these cases is individually determined, presenting challenges for the clinician. The good  outcome  of  pregnancies complicated by pem-higus vulgaris is more likely to be obtained from the close collaboration of obstetricians and dermatologists. Current data suggest increased rate of perinatal morbidity and mortality. In summary, pregnancy may have an adverse course, therefore, careful monitoring of the high risk mother and fetus is mandatory.