Introduction: Migrant pregnant women may require antenatal hospitalization due to complications of pregnancy. The aim of this study was to investigate the indications for admission, the baseline and the obstetric characteristics of migrant women hospitalized in a high-risk pregnancy unit (HRPU) and compare them with the native-Greek individuals.

Materials and Methods: A retrospective cohort study was conducted during the period 2005-2019. All pregnant women at ≥ 24 gestational weeks admitted in a University hospital HRPU were eligible for the study. Epidemiological characteristics, along with the indications for admission were studied and comparisons of several parameters between native-Greek and migrant pregnant women were conducted.

Conclusions: During the study period, threatened preterm labor followed by maternal complications were the most common indications for hospitalization. Migrant women were admitted to the HRPU more often than Greek ones for maternal complications. Finally, migrant status was associated with the method of conception, parity and smoking.

Migrants are the people who live in a country other than their country of birth; women represent about half of the migrant population and about one out of four belong to the reproductive age group1. During pregnancy, labor and the postpartum period, previous research has shown that, for migrant women, inadequate access and utilization of prenatal care, lack of interpretation services, incongruent cultural understanding  and unfamiliarity with local systems seem to affect the quality of antenatal care2.

Several conditions, including chronic maternal disease or antenatal complications may require hospitalization to a high-risk pregnancy unit (HRPU). However, a high proportion of migrants have no or limited access to appropriate antenatal care3; published data reported  that migrant women’s experiences of antenatal care included negative communication, discrimination, poor relationships with health professionals, cultural clashes and negative experiences of clinical intervention4. Importantly, late or no access to appropriate care is usually highly correlated with adverse antenatal and perinatal outcomes, including mental health disorders, maternal mortality, preterm birth and congenital anomalies of the newborn4,5. On the other hand, the “healthy migrant effect”, according to which migrants are healthier than people of similar ethnic backgrounds who were born in the host country, is paradoxical because many migrants have low socio-economic status, which should logically lead to less healthy lifestyles, fewer health-promoting behaviors, and less access to primary healthcare in the high-income host countries6.

Due to the fact that migrant pregnant women in Greece represent an increasing fraction of the population and may face high-risk pregnancies requiring antenatal hospitalization, the aim of this study was to investigate the indications for admission, the demographic characteristics and the obstetric parameters of migrant women hospitalized in a HRPU and compare them with the native-Greek individuals.

This was a retrospective cohort study for the period between January 2005 and December 2019. The study took place in the 3rd Academic Department of Obstetrics and Gynecology of the Aristotle University of Thessaloniki, which is a tertiary referral center for high-risk pregnancies, covering a population of more than 2 million, in Northern Greece. The inclusion criteria were: (1) gestational age > 24 weeks and (2) admission to the HRPU due to a pregnancy complication. The medical history, demographic characteristics and several obstetric parameters were collected from the women’s records.

All women had given their consent that their anonymized data may be used for future research. Moreover, as per standard policy for audit or observational database studies not involving any intervention or modification of the management of the participants (https://www.hra.nhs.uk/approvals-amendments/what-approvals-do-i-need/), no institutional review was required for this study7.

Absolute (n) and relative (%) frequencies were calculated for categorical variables, while continuous variables are represented as mean ± standard deviation (SD). The statistical analysis for the comparison of the collected data was performed using the Pearson’s Chi-square test for the categorical variables and the Independent-samples t-test for continuous variables. Odds ratios (ORs) and 95% confidence intervals (95% CI) were calculated. Statistical significance was defined as p<0.05. The analysis was performed using SPSS software v.25.0. 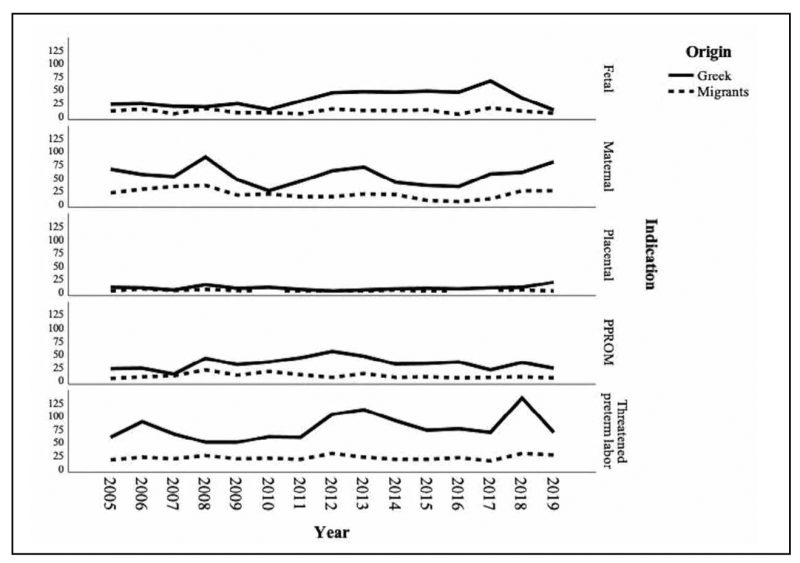 Figure 1. Indications for hospitalization to the high-risk pregnancy unit during the time period of the study. 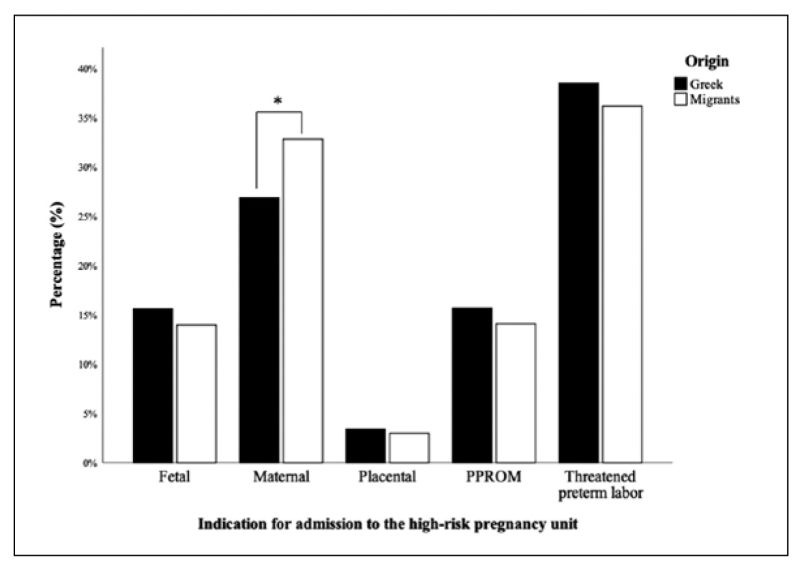 Figure 2. Comparisons in the indications for hospitalization between migrant and native pregnant women. Maternal conditions were more common among migrants (* p= 0.001).

The present study reported the main indications for hospital admissions in the HRPU of a European country, during a wide study period, in a large study population of almost 4,000 pregnant women, of which more than 20% were migrants. Throughout the study period i) threatened preterm labor remained the most common indication for admission, involving about 40% of the cases, ii) maternal indications were more common among migrant than native women and iii) migrant pregnant women were younger, more likely to have conceived spontaneously, be multiparous and smokers than the Greek individuals.

Interpretation of the findings

Regarding the main indication for admission to the HRPU, our results are in accordance with previous published data where threatened preterm labor was the most frequent diagnostic category for antenatal obstetric hospitalization8. Maternal complications were the second most prevalent category of indications, including mostly hypertensive disorders of pregnancy and poorly controlled diabetes. These conditions have been reported to affect 2–8% and about 7% of pregnancies respectively9,10. Regarding fetal complications, fetal growth restriction was the most common indication for admission, while placental complications, mainly placenta praevia, accounted for about 3% of indications, comparable to that of previous studies11.

As already mentioned, migrant women were admitted to the HRPU for maternal indications more often than Greek women. This may be partially attributed to the fact that adequate prenatal care rates tend to be lower for migrant populations12. Moreover, published data reported that access to perinatal care was worse for migrant women13. Unfamiliarity with local systems seems to be the main reason for not attending routine prenatal care. Lack of knowledge and awareness of services, difficulties in navigating in the local healthcare system, lack of information about appointments, language and communication problems, access to translation services and lack of documented postnatal follow-up may be other major problems. The rates of homelessness and poor social support tend to be also high among migrant women14. Moreover, Pedersen et al. reported increased risk for maternal morbidity and mortality among migrant women, especially due to hypertensive disorders, deep vein thrombosis and pulmonary embolism15. Evidence from a French study, (ELFE – Etude Longitudinale Francaise Depuis l’ Enfance) that examined health outcomes and behaviors of migrant populations, concluded that certain migrant pregnant populations tend to suffer from diabetes more often than the native individuals16.

In our study, migrant pregnant women admitted in the HRPU were younger than the Greek individuals (28.7 vs 30.9 years). This finding is in contrast with studies of neighbouring countries with similar migrant populations, which showed that no significant differences were identified between native and migrant pregnant women17. In addition, the hospitalized migrant population reported less cases of ART as a method of conception. These findings may be explained by the advancing maternal age in Greece and the lower socioeconomic status of migrants; ART is mostly a privately funded service in Greece making it affordable mainly for natives with better economic status, whereas migrants usually only depend on public services.

Additionally, migrant pregnant women were almost four times more likely to be multiparous than Greek individuals. This may be explained by the fact that access to family-planning services may be more difficult for the migrant population but, also, by cultural and religious (termination of pregnancy may not be an option) differences. Another finding of this study was that migrants in high-risk pregnancies tended to be smokers in a higher proportion than native women. It is estimated that the prevalence of smoking among pregnant women in Europe varies from 10% to 27%18,19. The World Health Organization advises pregnant women to abstain from cigarette use due to its well-known detrimental effects on maternal and fetal health18. Of note, smoking in pregnancy was reported to be around 20% in the study population, which is higher than that described by another study in a low risk population (13%)  by the same investigators, which is also in accordance with the adverse effects of smoking in pregnancy20. That study showed that ethnicity was not associated with current smoking status in the first trimester of pregnancy, but migrant smokers tended to quit smoking in a lower rate than Greek pregnant women20.

The present study has certain limitations that are mainly intrinsic to the retrospective nature of the study and its single center focus. The retrospective design did not allow the comparison of neonatal outcomes because many of the women did not eventually deliver in the unit but at their local hospitals. However, the study consisted of an analysis performed on a considerable population of migrant women in a wide time period and the main objective was to assess the indications for hospitalization.

To the best of our knowledge, this is the largest study taking place in Greece focused on the differences in indications for admittance and demographic and obstetric characteristics of migrant pregnant women hospitalized in a HRPU. As Greece receives an increasing number of migrants from neighboring countries, such studies may offer insight in specific health issues faced by migrant pregnant women. Thus, we found that maternal complications are more common among migrant women; healthcare policy planners may use our study results and thus create new strategies and adopt new evidence-based guidelines, related to population needs, so as to promote the antenatal and perinatal outcomes of these minorities.

Disclosure of conflicts of interest

The authors report no conflicts of interest.