Diabetic ketoacidosis in pregnancy is a rare but potential life-threatening condition for the mother and the fetus. Although predictably DKP is more common in patients with type 1 diabetes, it has been reported too in those with type 2 diabetes as well as gestational diabetes. Diabetic ketoacidosis usually occurs in the second and third trimesters because of insulin resistance. Prompt recognition and aggressive treatment of this condition are essential in order to reduce perinatal mortality and morbidity. Despite improvement in its incidence rates and outcomes over the years, it still remains a major clinical problem that posesseveral challenges with respect to diagnosis and management.

Diabetic ketoacidosis in pregnancy (DKP) is an uncommon but serious metabolic complication that expose in risk the fetus and the mother and occasionally result in significant morbidity and mortality.2 It is well established that fetal demise, preterm birth, and neonatal intensive care unit admissions occurred in 15.6%, 46.3%, and 59% of pregnancies complicated by DKP respectively.8 In 60% of the cases, fetal demise occurred at the time of or within one week of DKP.2 Although predictably DKP is more common in patients with type 1 diabetes, it has been reported too in those with type 2 diabetes as well as gestational diabetes. Diabetic ketoacidosis usually occurs in the second and third trimesters because of insulin resistance and often in the first trimester due to vomits.3

Despite improvement in its incidence rates and outcomes over the years, it still remains a major clinical problem that poses several challenges with respect to diagnosis and management. At present, most obstetric centers offer specialized care for diabetes in pregnancy, which reduces the chance of diabetic ketoacidosis episodes. The reported incidence of DKP in all diabetic pregnancies ranges from 0.5-3% depending on the population studied.1,2,10,12

Factors contributing to DKP in pregnancy

Diabetic ketoacidosis develops because of insulin deficiency and the simultaneous increase in counter-regulatory hormones (GH, cortisol, catecholamines and glucagon). This causes major changes in metabolism, such as lipolysis and proteolysis, which increase gluconeogenesis and contribute to the development of hyperglycaemia. Lipolysis provides excess free fatty acids to the liver, enhancing the process of ketogenesis with subsequent ketoacidosis. The factors that contribute to the increased risk of DKP are discussed below. 2,14

Pregnancy is a state of respiratory alkalosis because  the per minute alveolar  ventilation is increased  and this is compensated by a drop in bicarbonate levels. DKP can occur rapidly and at a much lower glucose level compared to non-pregnant diabetics.

Insulin sensitivity has been demonstrated to fall as much as 56% at the third trimester of gestation because of elevated production of insulin antagonistic hormones like prolactin, cortisol and human placental lactogen. Decreased gastrointestinal motility also contributes to increased absorption of carbohydrates promoting hyperglycaemia.

Nausea and vomiting are common due to increased human chorionic gonadotrophin in early pregnancy and increased oesophageal reflux in third trimester. The resulting stress and increases insulin antagonistic hormones and along with dehydration contributes to ketoacidosis.

Diabetic ketoacidosis is likely to be precipitated by specific factors summarized in Table 1 bellow.

Diagnosis of diabetic ketoacidosis in pregnancy

The clinical presentation of DKP  can be variable (summarized in Table 2.) as women often present with non specific symptoms that are also common in a normal pregnancy such as nausea, vomiting, fatigue, dehydration, or abdominal pain.2 As such, the diagnosis is focused on laboratory abnormalities that include hyperglycaemia (>200-300 mEq/L), anion gap acidosis (AG>12 mEq/L), Ph<7.30, HCO3<15 mEq/L, elevated base deficite>4mEq/l  and ketonuria or ketonemia.

Once identified, DKP is considered an obstetrical emergency that needs to be managed in critical care units such as intensive care unit or a high-dependency unit, by a team of professionals experienced in dealing with similar cases. This team consists of an obstetrician, a diabetologist/endocrinologist, an obstetric anaesthisiologist and well trained midwives. The management incorporates the laboratory aspects described below (hyperglycaemia, anion gap, Ph, HCO3, base deficitel, ketonuria, ketonemia). At the same time it is important to stabilize the patient and insert large intravenous accesses or central venous line and continuous maternal  monitoring with a cardiac monitor and pulse oximetry. 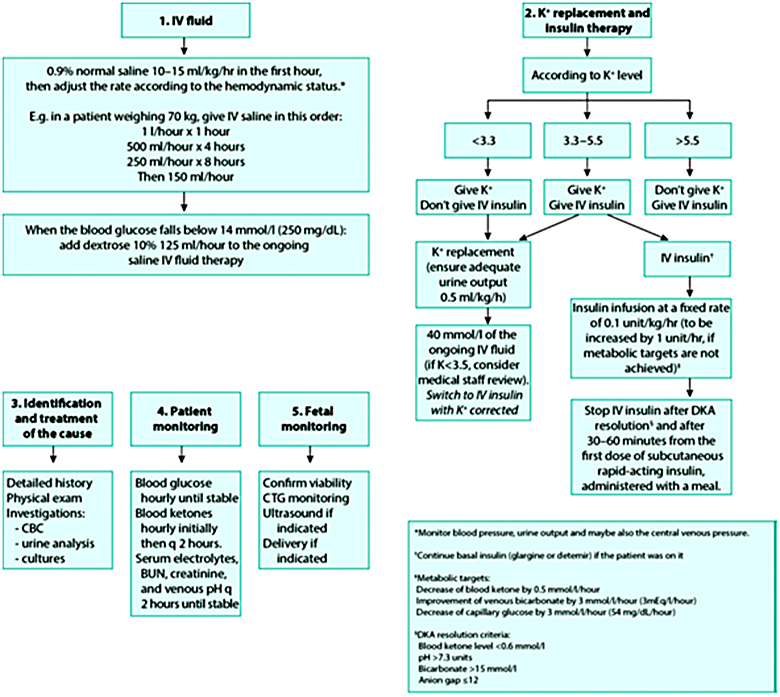 Goals of management focus on prompt diagnosis, correction of hypovolemia to increase uteroplacental and renal perfusion, insulin to low serum glucose, correct acidosis and electrolyte aberrations, identification and treatment of any underlying causes and monitoring of maternal and fetal responses.

Continuous fetal monitoring is mandatory to asses fetal well-being.2,8 Maternal dehydration with acidosis caused by reduced uteroplacental perfusion involve DKP. In addition, electrolyte disturbances (particularly potassium) could result in maternal and/or fetal arrhythmias which may lead to fetal death. A non-reactive fetal heart tracing, repetitive late decelerations, or a non reassuring biophysical profile may be present indicating fetal compromise in the ketoacidotic patient (Figure 2).1 This is often corrected with maternal hydration and correction of metabolic acidosis. Doppler studies may also reflect the fetal acidotic status. Normalization of fetal heart trace may take 4 to 8 hours after DPK is solved.4,5 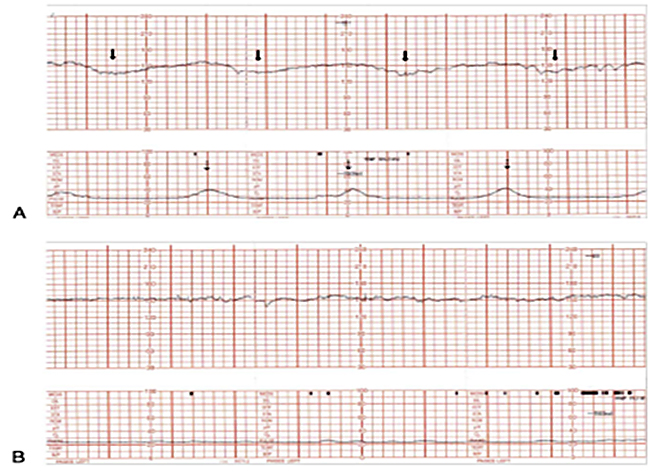 Figure 2. A. Fetal heart rate monitoring of a patient during an acute episode of diabetic ketoacidosis demonstrating uterine contractions, minimal variability, and late decelerations (solid arrows) after each contraction (dashed arrows). B. After correction of maternal hyperglycemia and acidosis, uterine contractions and late decelerations were resolved. In addition, there is now moderate variability.
Sibai. Diabetic Ketoacidosis in Pregnancy. Obstet Gynecol 2014.

Delivery decision should be individualized, based on the fetal gestational age, the fetal heart tracing and the maternal clinical status. Subjecting a patient in diabetic ketoacidosis to emergency caesarian section could cause further maternal deterioration while offering minimal benefit to the fetus. In case of preterm labor, magnesium sulphate is the tocolytic of choice and β-agonists are contraindicated. In DKP the aim should be to fetal monitoring until the maternal metabolic state is stabilized, without proceed to immediate delivery and to continue the pregnancy if it is possible. There is no consensus on further fetal monitoring after resolution of DKP especially in preterm fetuses.2,11,12

Prevention of diabetic ketoacidosis in pregnancy

Preconception counseling, diabetes screening and education of the woman in obstetric and diabetic clinic are important in preventing DKP in diabetic pregnancies.9 Women diagnosed with diabetes should be educated about how to identify the precipitating factors and symptoms of DKP. Patients should have a glucose meter for self-monitoring and those with type 1 diabetes should have a ketone meter. If glucose plasma levels are persistently above 200 mg/dl or if there are signs of infection or any symptoms described in Table 2 pregnant woman should be assessed for hospital admission.2,3 Attention is needed when a woman with diabetes requires antenatal corticosteroid therapy for fetal lung maturation in a suspected preterm birth as her insulin dose has to be adjusted (usually increased by 25-40%).4,13 In addition when tocolysis is required, it is preferable to avoid betamimetics and use safer tocolytics such as oxytocin receptor antagonist (atosiban) or a calcium channel blocker (nifedipinne).6

While the outcomes of diabetic ketoacidosis in pregnancy have improved over the years it still remains a life threatening condition for the mother and the fetus.13 Prompt diagnosis and rapid initiation of acute care from an experienced medical team along with patient education remain the cornerstones to minimize the outcomes of this dreaded compication.