Glycogen storage disease Type IV is a rare hereditary autosomal recessive disorder caused by deficient enzymatic activity of glycogen branching enzyme (GBE) which is encoded by GBE1 gene. We hereby report the case of a 32-year-old woman presented with a first-trimester miscarriage. The histologic findings of the placental tissue included intracytoplasmic inclusion vacuoles suggested GSD‐IV. The diagnosis was confirmed by the genetic analysis of the parents, in which mother was found to be carrier of a GBE1 mutation. This variable disorder can be diagnosed by histopathology of the placenta but for its confirmation and prevention in subsequent pregnancies, genetic analysis is needed.

Glycogen storage disease Type IV (GSD-IV) or Andersen disease is a rare autosomal recessive metabolic disorder caused by glycogen branching enzyme (GBE) deficiency leading to the accumulation of insoluble abnormal glycogen with fewer branching points (polyglucosan-like) in the affected tissue. GBE is encoded by the glycogen branching enzyme 1 (GBE 1) gene located on chromosome 3p14. GBE 1 mutations are the only known to cause GSD-IV1-2. The clinical presentation of the disease and the tissue involvement are heterogenous. The GSD-IV phenotype ranges from mild to severe, even fatal1. Placental involvement was initially described in 2008 in two cases with fetuses delivered during the third trimester of pregnancy3. Early miscarriages due to placental polyglucosan-bodies accumulation have also been described4. In this case report, we present placental histopathology and genetic data of another GSD-IV related first trimester miscarriage.

The histologic findings confirmed the presence of a first-trimester abortion. Embryonic structures were not recognized on the aspirated material. Microscopic examination of the placental tissues demonstrated irregular trophoblastic layer and clusters of signet-ring cells in the intervillous space surrounded by trophoblastic cells or adjacent to chorionic villi (Figure 1). These signet ring like cells contained Intracytoplasmic inclusion vacuoles with light eosinophilic reaction in Hematoxylin-Eosin staining. Inclusion bodies were also strongly reactive to Periodic acid-Schiff (PAS) and PAS diastase staining, while negatively reactive in alcian blue staining. These findings were compatible with polyglucosan-like deposits in placental tissue, raising suspicion of GSD-IV. Typical inclusion bodies were not identified by electron microscopy since the affected trophoblastic cells were sparsely scattered within placental tissue. 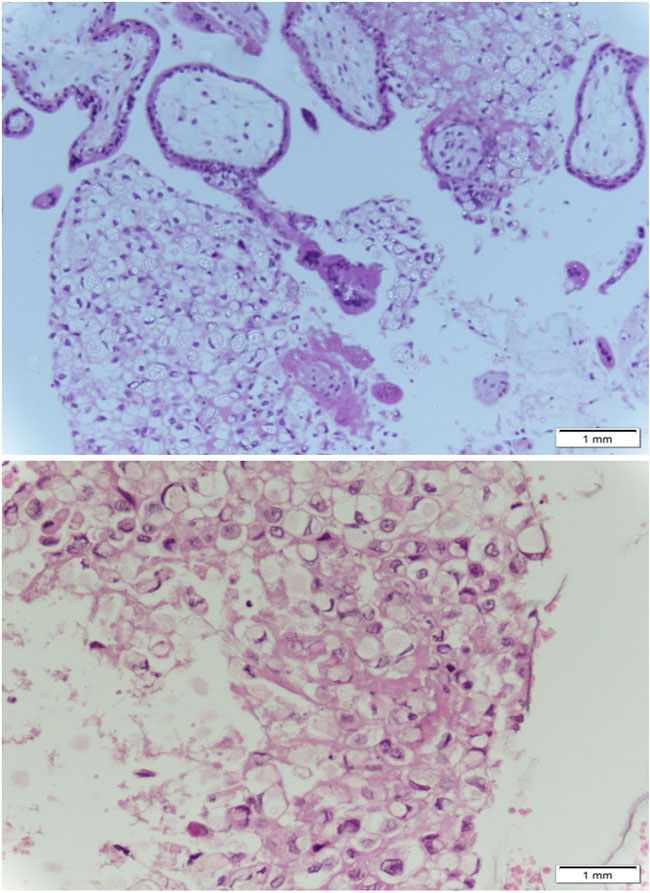 A constitutional genetic analysis was performed on both parents after genetic counseling and informed consent. Genetic testing was performed using polymerase chain reaction (PCR) and next generation sequencing (NGS) methods. Mother was found to be a heterozygote for a novel GBE1 mutation p.Pro159Leu (c.476 C>T), which results in a replacement of proline (Pro) amino acid by leucine (Leu) in position 159. This GBE1 mutation causes GSD-IV has not been previously described. DNA analysis of the parental specimen did not reveal any GBE1 mutation.

GSD-IV is a rare disease, representing 3% of all glycogen storage disease and may be under-diagnosed5. Rarely, as in our case, GSD-IV may be caused by a heterozygous GBE1 mutation and a heterozygous deletion of one or more exons of  the allele GBE1 gene 6-9. GSD-IV may affect early pregnancies leading to trophoblastic damage and early fetal loss5. Placental involvement underlines the importance of histopathologic examination of the placenta in cases with early miscarriages. When vacuolated cells are discovered during histopathology of the placental tissue, GSD-IV should be suspected4. However, genetic analysis of both miscarriage material and parents is required to confirm the diagnosis. Prenatal genetic testing should be performed in subsequent pregnancies5.

AP, KZ and EC wrote the first draft. SK, TC and AF critically reviewed and amended the draft. All authors approved of the final draft.