University Hospital of Heraklion, Department of Obstetrics and Gynecology

Secondary postpartum hemorrhage is described as extreme bleeding starting within 24 hours following delivery up to 6 weeks postpartum and usually appearing between 8 and 14 days postpartum. In such cases, physicians should firstly exclude the presence of  retained products of conception, of partial or incomplete involution of the placental bed and the possibility of endometritis. Rare cases of secondary postpartum hemorrhage include the presence of pseudoaneurysms of the uterine artery, arteriovenous malformations, and choriocarcinoma1.

Pseudoaneurysm is the result of extra-luminal collection of blood. This is usually encircled from the adventitia of the vessel or in rarer cases which can be fatal from perivascular soft tissue. The absence of a three-layer arterial wall lining in the pseudoaneurysm is distinctive and helps establish the differential diagnosis from a true aneurysm. When the supplying blood originates from the uterine cavity it can cause persistend and severe secondary hemorrhage. Pseudoaneurysms may be asymptomatic, may thrombose, or can result in distal embolization that is usually manifested as painful swelling of the distal part that is involved. The risk of rupture is equivalent to the size and intramural pressure2.

Diagnosis of pseudoaneurysm of uterine artery is established with the use Doppler sonography and arteriography. Transcatheter uterine artery embolization (UAE) is a highly successful technique for treating both gynecologic and obstetric hemorrhage, including pseudoaneurysms2,3.

On abdominal examination, the c-section scar appeared to be normal and no any other abnormality was recognized. She was extremely heavy bleeding per vaginum . The uterus was bulky and the cervical os was closed. Her hemoglobin (Hb) level was 4.1 g/dl and hematocrit (Ht) 12.6 %. Her blood pressure was 92/59 mmHg and Heart Rate was 129 bpm. Transvaginal ultrasonography with color Doppler revealed obviously a postpartum uterus with no apparent abnormality. So, there was no evidence of remaining placental tissue in the uterine cavity & endometrial thickness was only 7 mm. Then Computed tomography (CT) angiogram was performed and diagnosis of pseudoaneurysm from the left uterine artery was established. She then was stabilized with crystalloids, four units packed red blood cells (RBC), and started on broad spectrum antibiotics immediately.

After blood transfusion she got hemodynamically stable. To preserve the fertility in this young woman a transcatheter arterial embolization of this pseudoaneurysm was scheduled. She underwent digital subtraction angiography. Selective left uterine artery angiogram revealed a pseudoaneurysm from the terminal part of the left uterine artery (Figure 1). Left uterine artery was carefully embolized with:1) mixture of gelfoam and contrast media & 2) followed by 1 stainless steel coil 4 mm in diameter. A post embolization angiography was done to confirm the complete occlusion of the vessel. The pseudoaneurysm was successfully obliterated (Figure 2). The patient preserved her uterus. 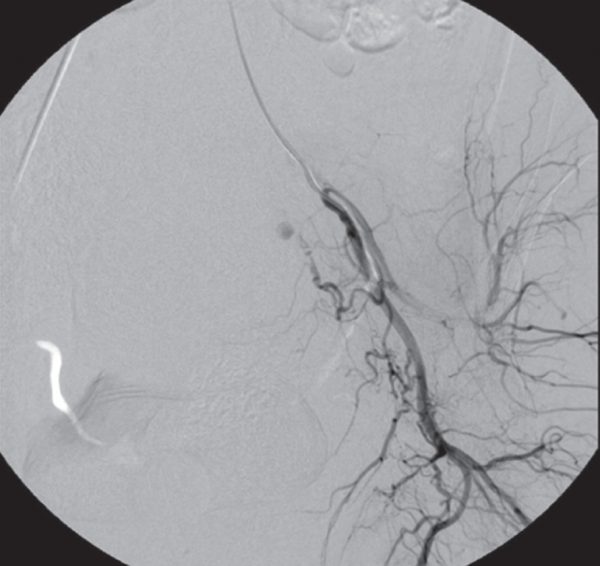 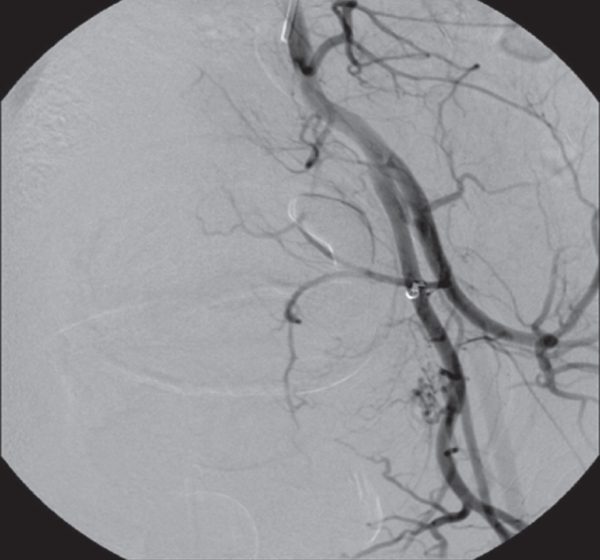 Figure 2. Post-embolization angiography of the left uterine. There is no evidence of a pseudoaneurysm

Postpartum hemorrhage is considered a major cause of maternal morbidity and mortality, particularly in developing countries2. Accurate and timely diagnosis of the underlying cause is of paramount importance to help stabilize the patient and avoid severe morbidity. Vascular causes of delayed postpartum hemorrhage (other than iatrogenic injury) are rare. Avoidance of unnecessary curettage in cases that do not present with retained products of conception is prudent in order to avoid fatal blood loss. With the establishment of latest imaging techniques, the diagnosis of uterine artery pseudoaneurysm has become easy. The diagnosis of a pseudoaneurysm can be made by color Doppler ultrasonography, computed tomography (CT), magnetic resonance imaging, and angiography. Angiography, however is the gold standard method in diagnosis of uterine artery pseudoaneurysm4.

Typically, development of pseudoaneurysms is a complication of vascular injury resulting from trauma, inflammation, or iatrogenic causes such as surgical procedures. Cesarean section is the most prevalent cause (it counts for approximately 47% of cases3,5. The cause of arterial injury, resulting in the formation of the uterine artery pseudoaneurysm in our case, is unknown. The uterine incision for the Cesarean section as well as the sutures that were used during its closure could both explain its presence. The addition of a second layer of hemostatic sutures to control the bleeding at the angles of the uterine incision could also lead to the formation of the pseudoaneurysm4,6. The interval between pelvic surgery and beginning of symptoms ranges between 1 week and 3 months, but delayed cases observed as late as 2 years later have been also reported. In a review by Isono et al, the mean timeframe between cesarean section and presentation with symptoms was 14.5 days. In our case hemorrhage developed 17 days post c-section7,8.

In 1979, Brown, et al described the first successful case of selective arterial embolization for treatment an extra-uterine pelvic hematoma after three failed surgical attempts. From that time, arterial embolization has been used extensively to control postpartum bleeding with the success rate following embolization around 97%, which is high9. Young Ho Choi, studied the effectiveness of uterine artery embolization and reported 90% overall success rate with 10% complications, which suggests that selective angiographic embolization could  be considered a first-line diagnostic and  treatment method for uterine artery pseudoaneurysm10. Surgical intervention such as a hysterectomy or an internal iliac arterial ligation is preferred in hemodynamically unstable women. The described success rates for internal iliac artery ligation differ from 42%–100% because of the large pelvic collateral circulation11.

In a patient with abnormal vaginal bleeding after c-section, the presence of pseudoaneurysm  should be examined  as one of the possible causes of secondary postpartum hemorrhage. Pseudoaneurysm is a probably fatal complication2. Angiographic embolization is a safe, practical and applicable method for managing postpartum hemorrhage due to pseudoaneurysm in hemodynamically stable patients. However, for hemodynamically unstable patients uterine artery ligation should be preferred when we desire fertility preservation.

Angiographic embolization is preferred cause of: 1) decreased morbidity, 2) the capability to localize the bleeding site 3) to provide a more distal occlusion than surgical  ligation and 4) the preservation of future fertility in contrast to hysterectomy. Although data are insufficient, bilateral uterine artery embolization for obstetric hemorrhage turns out to not decrease subsequent fertility and is more successful when compared to unilateral embolization.