Imperforate hymen is an uncommon obstructive anomaly of the female reproductive tract for which early diagnosis is easy to miss. Untreated cases after menarche may cause cyclic lower abdominal pain and amenorrhea. Hymenotomy is considered proper management in order to avoid complications associated with late treatment. We report a case of an imperforate hymen in a 13-year-old adolescent girl presenting with tenesmus and acute lower abdominal pain. The patient was treated with hymenotomy and postoperative period was uneventful. Tenesmus and lower abdominal pain resolved immediately after surgery and during follow up the girl reported normal menstrual cycles. According to our case, tenesmus may be an atypical clinical presentation of imperforate hymen. Therefore, imperforate hymen should not be eliminated from differential diagnosis when it comes to adolescent females with abdominal pelvic pain and gastrointestinal symptoms and gynecological examination should be performed.

Imperforate hymen is the most common congenital anomaly of the female genital tract leading to vaginal outlet obstruction. Embryologically, imperforate hymen results from failure in canalization of the most caudal portion of the vaginal plate at its juncture with the urogenital sinus1. It occurs in 0.05%-0.1% of female newborns, although true incidence is difficult to obtain2. The majority of cases pass unnoticed, until becoming symptomatic during adolescence 1. Although cases diagnosed in utero by antenatal ultrasonography or during the neonatal period are also documented3.

Usually, most patients present with primary amenorrhea, cyclic lower abdominal pain, and hematocolpometra secondary to the accumulated menstrual blood. Atypical clinical presentations of imperforated hymen are also reported in the international literature 4. We hereby present a case of an imperforate hymen as a cause of tenesmus and acute lower abdominal pain.

A 13-year-old premenarchal adolescent female presented to our emergency department complaining of acute lower abdominal pain that started before 24 hours and painful rectal tenesmus. Her appetite was reduced and food intake was poor due to the abdominal pain. Patient described a cramping rectal pain and constipation the last five days with a previous history of daily passage of stools. From past medical history, patient reported two episodes of pelvic pain in the past five months, which improved without treatment.

On general examination, the patient appeared phenotypically normal and secondary sexual characteristics were well developed (Stage 4 on Tanner scale). Examination of the abdomen elicited suprapubic tenderness and a palpable mass corresponding to the size of a 12 weeks gravid uterus. On rectal examination, a large mass was felt anteriorly. Genital examination revealed a bulging bluish membrane when retracting the labia. 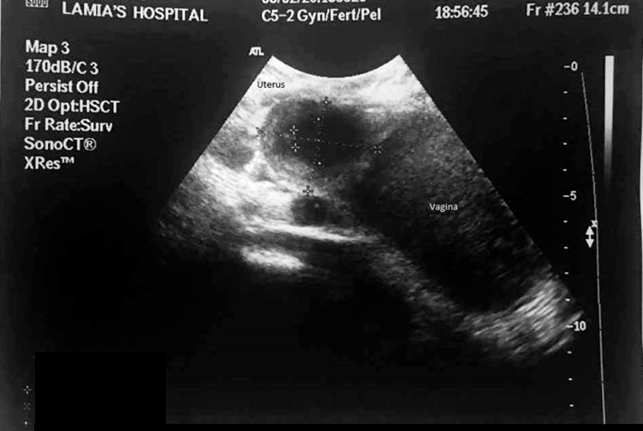 Informed consent was obtained from her guardian and patient was brought to the operating room for surgery under general anesthesia. A hymenotomy with crucial incision was performed followed by drainage of approximately 600ml of dark red-colored, malodorous blood.

Antibiotics were administered orally to treat possible vaginal infection. Postoperative course of the patient was uneventful and she was discharged after 2 days. During outpatient follow-up in the subsequent year, she reported normal menstrual cycles, symptoms had resolved and pelvic ultrasonography confirmed a regular-shaped uterus.

We herein report a female patient who presented with tenesmus and acute pelvic pain as a rare and atypical clinical presentation of an imperforate hymen, and to our knowledge this is the third reported case 1, 5.

The majority of symptoms of imperforate hymen occur after menarche due to collection of blood in the vagina and the uterus. The most frequent clinical presentations are cyclic lower abdominal pain and genitourinary symptoms, including urinary retention and abnormal menstruation6, 7. A recent comprehensive systematic review on imperforate hymen demonstrated that tenesmus was a clinical gastrointestinal symptom in 0.8% of all cases (2 in 236 patients) 1.

Imperforate hymen is a clinical diagnosis by inspecting the external genitalia, although an additional abdominal sonographic examination may accurately reveal a pelvic cystic mass2. Magnetic resonance imaging can provide details regarding the thickness of the imperforate hymen and may exclude concomitant congenital Müllerian anomalies8.

Late diagnosis and treatment of imperforate hymen may be associated with complications such as infections, endometriosis, infertility or hydronephrosis and renal failure in rare cases9. Moreover, differential diagnosis from vaginal septum or agenesis is of outmost importance in order to prevent severe complications of inaccurate treatment.

Imperforate hymen can mimic acute appendicitis; hence a multidisciplinary approach consisting of general surgeons and gynecologists is of outmost importance in order to exclude acute abdomen from differential diagnosis when it comes to adolescents with abdominal pain and gastrointestinal symptoms10.

Therapeutic management aims to restore vaginal outflow through hymenotomy using simple vertical, cyclical, cruciate, and T-shaped or X-shaped incisions11. Small incisions and punctures into hymen without definitive treatment should be avoided because inoculation of bacteria may lead to infection of female genital tract12. Hymenotomy’s outcome is relatively favorable and reformation of imperforate hymen after surgery is rare 6, 11.

In conclusion, imperforate hymen is a rare local fusion anomaly and diagnosis can be easily confirmed. When detection is delayed until adolescence, imperforate hymen should be considered a possibility in female patients who complain of lower abdominal pain and nonspecific symptoms such as tenesmus. Therefore, perineal examination should be conducted as a routine part of initial evaluation in adolescent girls presenting with pelvic pain and urogynecological or gastrointestinal problems. When prompt treatment is carried out, the prognosis of imperforate hymen is good.

KZ and EC wrote the first draft. SK, TC and AF critically reviewed and amended the draft. All authors approved of the final draft.

Revisiting the effectiveness of a forgotten technique: the value of blue dye on sentinel lymph node biopsies of gynecological cancer

Laparoscopic surgery for clear cell endometrial carcinoma, is it a realistic approach?

Reconstruction of small and moderate defects of the perineum