Maternal adaptations in pregnancy induce complex physiological changes of the immune system which protect mother’s health and ensure the accommodation of the growing embryo. The innate immunity is amplified and the adaptive immunity is partially suppressed, preserving the ability to produce antibodies. Vaccination during pregnancy constitutes a fundamental preventive measure in the antenatal care, as it achieves both the immunization of the mother and the baby. Besides passive immunization through the placenta, also active transfer of IgG via placenta occurs throughout pregnancy. Live attenuated vaccines (LAV) are contraindicated in pregnant women, while the others should be recommended if benefits overshadow risks.

Pregnancy has been considered as a period of immunosuppression for the mother1,2. Nowadays, these data seems to be overturned, since immune system adaptations keep maternal defense ability in satisfactory levels2. Moreover these changes maintain an immunologic tolerance to the hemi-allogenic embryo which partially consists of paternal antigens3. Immunological changes take place to almost all the immune cell lines. Regarding innate immunity and especially the antigen presenting cells (APCs), the adaptations include:

The trigger factors of these changes are still obscure. However, the hormonal changes during pregnancy may play a central role as they are involved in a number of body functions, including the immune system regulation. Estrogens, for example, are known to suppress the production of B-lymphocytes in the bone marrow4. On the other hand, estrogens seem to help B-lymphocytes to survive for longer periods in circulation and also robust their ability to produce antibodies4. Interestingly, the reduction of B-lymphocytes in mother’s serum is not accompanied with an equal maternal antibody reduction or weaker immune response2.

Pregnancy adaptations affect maternal response to infections and vaccination. Studies on maternal vaccination, have shown that these adaptations do not suppress antibody production throughout pregnancy and especially during the 3rd trimester were most vaccinations are performed if necessary 5,6. Influenza vaccines studies have shown that the percentage of response differs during the course of pregnancy with the most weak to be noted before the 13th week and the most robust after the 34th gestational week5. Other studies have shown decreased immunological responce7 or a result of memory response from the already sensitized mature maternal B-lymphocytes (boosting effect)5,8.

Regarding the safety of vaccination during pregnancy, the majority of the studies show that they are safe and effective not only for the mother herself, but also for the fetus and newborn6,9,10. In a small study, there was a correlation between first trimester vaccination and the delivery of small for gestational age (SGA) newborns11. Interestingly, one study showed a correlation between strong immune response of the pregnant woman and preterm birth11.  Women that delivered preterm after being vaccinated against H1N1, had higher percentages of seroconversion versus women who delivered full term11.

The impact of vaccines in fetus

The highest transport of maternal antibodies to the fetus happens during the last 4 weeks of the third trimester. This replica of maternal chemical immunity provides equal protection to infants during the first 6 months of life. Therefore, this mechanism is the basic modulator of neonatal immunity12,18.

IgG antibodies are the only class of maternal antibodies that crosses extensively the human placenta. The IgG are transported either as a single molecule or as an IgG-immune complex (IgG-IC) 12,13.

The neonatal FcRn receptor binds the Fc portion of IgGs at acidic pH (≤6.5) and mediates IgG trafficking. FcRn is expressed in placental cytotrophoblast, in endothelium, in epithelium, macrophages (Mfs), and dendritic cells (DCs), in hematopoietic cells and in the mucinous cells of the fetal lung and gastrointestinal tract12,13,14,19.

IgG enter in cells from the micro-environment (fluid or blood) through phagocytosis. In an acidic compartment (pH≤6.5) FcRn binds to IgG and recycles it by accompanied it back to the cell surface where releases it (pH 7.0–7.4). (Figure 2) FcRn binds preferentially with IgG and in this way, a high distribution and levels of IgG all over the body is ensured. FcRn receptor expression depends on gestational age and it is over-expressed in the third trimester of pregnancy, leading to a higher rate of IgG transportation during late pregnancy, as said above13,19. 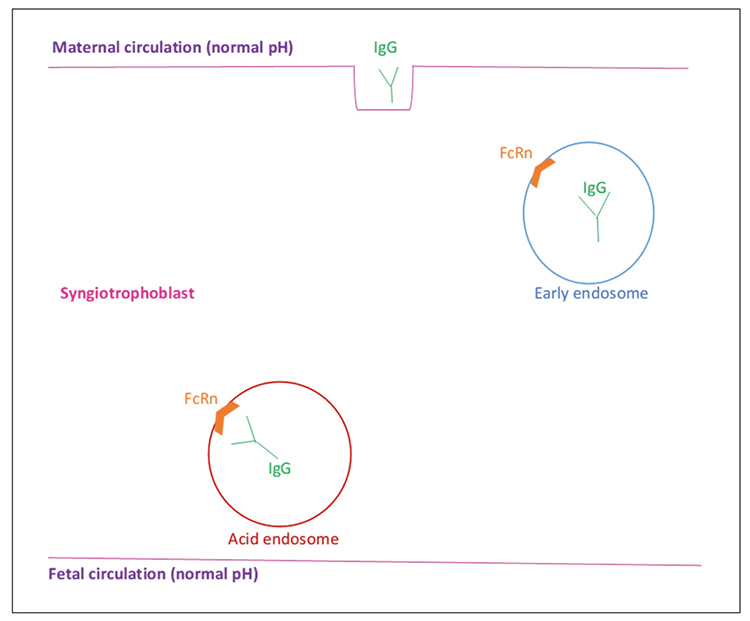 Figure 2. Syncytotrophoblast cells, which are soaked by maternal blood, endocytes maternal IgG, into endosomes. The FcRn receptor is expressed on the inner surfaces of the endosomes. Two IgG molecules bind to each FcRn receptor under acidic environment and get protected from degradation by lysosomal enzymes. The acidic endosomes are transported and fused to the membrane on the fetal compartment of the syncytotrophoblast, where the pH is normal and IgG is released from the FcRn receptor into the fetal circulation and subsequently can be recycled performing another transport cycle. The FcRn receptor shows much higher affinity for IgG in acidic environments (pH 6) compared to the normal (pH 7.4) which characterizes maternal and fetal blood.

The placental transport system is extremely selective, as it allows only IgG antibodies to pass through and blocks the transport of other major immunoglobulin classes including IgE, IgM, IgA15. Maternal IgG antibodies are divided into 4 subclasses (IgG1, IgG2, IgG3 and IgG4). Every subclass response to vaccines is varied up on the vaccine components. Vaccines containing protein antigens (e.g. tetanus toxoid) induce the production of IgG1 antibodies, whereas vaccines containing polysaccharide antigens (e.g. pneumococcus) induce the production of IgG2 antibodies. IgG1 and IgG4 subclasses own a higher affinity for the FcRn receptor compared to IgG2 and IgG3. For that reason IgGs exhibit different transportation ability with the IgG1 presenting the highest preferential transport ability while the IgG2 the lowest. The IgG transport shows saturation kinetics, because it is paused when IgG levels reach up to 15g/L. Thus high levels of IgG antibodies lead to the saturation of FcRn receptors and consequently to an unbound IgG fraction that it will be degraded by lysosomal enzymes within the vesicles12,13,17.

In the fetal circulation maternal IgG bind to FcRn receptors expressed at barrier sites, such as the blood-brain barrier, the glomerular filter, and the intestinal epithelium and are transported to promote fetal defense or control13,19. FcRn receptors on the intestinal epithelial cells bind IgG molecules from the ingested amniotic fluid mediating their intracellular transport to the fetus and promoting the activation and maturation of the fetal immune system in the first months of pregnancy14,16,19.

Vaccines containing live attenuated microorganisms are contraindicated in pregnancy as they reach the fetal circulation through the placenta and consequently have the potential to cause infection and congenital anomalies to the fetus20.

Therefore, the following vaccines should not be given to pregnant women20:

Vaccines which should be used  only under certain circumstances

The following vaccines should be given only when the benefits outweigh the risks20:

However, the CDC recommends IPV for pregnant women at high risk of infection. High risk groups include travellers to endemic countries20

Consulting a woman after a contraindicated vaccination during pregnancy

Vaccines containing live attenuated pathogens, such as MMR, BCG, Varicella, smallpox e.t.c., are contraindicated during pregnancy as they present a hypothetical risk of overcoming the placental barrier and infect the fetus20.

The reports for poor perinatal outcome are weak, due to the lack of studies.  If the vaccine is inadvertently administered during pregnancy or when pregnancy happens earlier than 28 days after vaccination, consultation should be done about the potential fetal risks26. Regarding rubella, the Advisory Committee on Immunization Practices (ACIP) gathered data from vaccination registries in the Europe (years 1971-1990 and 2001-2004) and the USA (1971-1988). Among 680 live births to rubella-susceptible women, none of the infants was diagnosed with Congenital Rubella Syndrome (CRS)25. Studies in Canada, Latin America and Islamic Republic of Iran reveal that among 3500 rubella-susceptible women, who had been vaccinated against rubella shortly before or during pregnancy, there was none case presented congenital defects (e.g. hearing loss, cataract, mental retardation, congenital heart disorders) 25. According to the available data, vaccination during or shortly before pregnancy should not be a reason of pregnancy termination20.

In 1995 a study was conducted by the Merk and Co. in collaboration with the CDC, in order to examine the maternal and fetal outcomes, after the inadvertent vaccination of women with the varicella vaccine within 3 months before pregnancy period or during pregnancy27.  None case of congenital varicella syndrome (CVS) or birth defects documented (e.g limb hypoplasia, microcephaly, low birth weight, cortical atrophy, chorioretinitis, cataract)20. The rate of major birth defects was similar to the background population (3.2%)20. The study results do not exclude the contingent risk to the fetus, however the risk is low and pregnancy termination is irrational 20.

According to a review article of 2014, about the safety of vaccines during pregnancy, it seems that live attenuated vaccines (e.g. measles, mumps, rubella) do not rise safety concern for the fetus and the infant25. The benefits of vaccination outweigh the potential risks and the results are reassuring that the risk is absent or minimum 25.

For the recombinant technology HPV vaccine, and especially for the quadrivalent HPV vaccine (qHPV) more data are available in the literature comparing to the prior ones. The rate of adverse pregnancy outcomes (e.g. spontaneous abortion, congenital anomalies, late fetal death) is not raised by the vaccination with the qHPV 28. Τhe data for the 9-valent HPV vaccine are limited, but equally reassuring. The results from a combined analysis study of seven phase-III clinical trials on the 9-valent HPV vaccine, have shown that the spontaneous abortion frequency was higher in the inadvertent vaccination of pregnant women with the 9v-HPV vaccine than with the qHPV, but always within the range of the background population and none of the congenital anomalies was associated with the vaccination28.

CDC data from 29th March 2020 to 14th October reveal that, pregnant women do not have an increased risk of Sars-Cov-2 infection compared to non pregnant women, but the infection of a pregnant woman increases the risk of severe complications 30. The data regarding the efficiency and safety of COVD19 vaccines in pregnant women are limited, because pregnant women have been excluded from any clinical trial30. However vaccination during or shortly before pregnancy do not cause disease but nonspecific side effects from activation of the immune system may occur30,31.

The immune system of women changes and adapts to pregnancy, as is incited by the hormonal and physiological changes developing during pregnancy. The innate immunity becomes enforced and modified in order to prevent the maternal infections. The adaptive immunity seems to be partially suppressed, but the B lymphocytes preserve and enhance their ability to produce immunoglobulins, as is proven by vaccination studies, especially during the 3rd trimester. Fetal immunization is achieved by maternal IgG antibodies transportation through the placenta assisted by neonatal FcRn receptor. There are some proven risks of receiving live attenuated vaccines during pregnancy and for that reason they are contraindicated. However, vaccines containing other ingredients could be given, when the benefits outweigh the potential risks. It is important to stress that, in case of an inadvertent vaccination during pregnancy, pregnancy termination should not be recommended.