Material and Methods: The study was conducted in a private maternity hospital. Women were asked to fill in an adapted questionnaire based on Pregnant Physical Activity Questionnaire; birth outcomes and anthropometric measurements of the neonate were collected by the research midwife.

Results: In our study population of 193 pregnant women, approximately half reported no or minimal physical activity during pregnancy and were less active than current guidelines’ recommendations. Gynaecologist’s opinion regarding exercise during pregnancy was conceived as positive only by a minority of women. Overall, women were less active during pregnancy than before, although they spent more time slowly walking for fun or exercise. Lastly, significant decrease was observed in all occupational activities involving slow or quick walking and lifting weights.

Conclusions: These results indicate that systematic counselling of pregnant women regarding physical activity and exercise during pregnancy will be needed to achieve optimal physical activity levels for the majority of women in Greece.

Several public health and clinical guidelines regarding physical activity and exercise during pregnancy have been published around the World. These guidelines are mostly addressed to developed countries, such as Australia, Canada, Japan, the United States, and European countries4. In general, most guidelines advise against vigorous exercise and/or athletic competition during pregnancy, although high-intensity physical activity before pregnancy might continue as long as the pregnant woman feels comfortable4. With regard to physical activity duration, two hours per week is regarded as the minimum; aerobic exercise is usually indicated, although strengthening exercises are also advised in some guidelines4. In case of dizziness, shortness of breath, vaginal bleeding, amniotic fluid leakage, and abdominal or back pain, exercise discontinuance is advised4. Despite the existence of the aforementioned guidelines, women’s adherence has been shown poor and their physical activity during pregnancy is reported low across the world5–13.

This was a cross-sectional study conducted in a private maternity hospital located in the capital city of Greece, Athens. Pregnant women giving birth were approached to participate, with the exception of pregnant women with an elective caesarean section for any indication. Women were asked to fill in a questionnaire and provide informed consent, so that the birth outcomes and anthropometric measurements of the neonate could be collected by the research midwife. The study protocol was approved by the Research Ethics Committee of the Maternity Hospital.

The assessment of the intensity and frequency of physical activity before and during pregnancy was based on the Pregnant Physical Activity Questionnaire (PPAQ)14. This is a semi-quantitative questionnaire that examines the daily or weekly time spent during pregnancy for activities that involve physical activity14. The examined activities are grouped into occupational activities, activities related to the household, to sports or exercise, and to transportation14. In addition, three questions that reflect inactivity are also included in the questionnaire14. PPAQ was translated by two independent translators from English to Greek; all of the translated questions were identical with the exception of the two questions related to lowing lawn. These were combined into one question regarding gardening, which was deemed necessary for cultural reasons. Furthermore, two questions regarding preparing meals and light cleaning in house were merged into one for cultural reasons as well. In addition, all questions were asked both for the period during pregnancy and for the period before pregnancy, so that any change in pregnant women’s physical activity due to the pregnancy could be examined. In order to ensure that the translated and adapted questionnaire remained internally consistent, Cronbach’s alpha was calculated. Apart from the aforementioned, women were asked to report the number of previous pregnancies, vaginal labours, and caesarean sections, as well as their demographic and anthropometric characteristics. Birth outcomes, such as mode of birth, birth weight, and gestational age at birth, were recorded by the research midwife.

In a sensitivity analysis, we examined whether our results regarding changes in physical activity during pregnancy were driven by women that were advised to bed rest by their gynaecologist due to medical indications. To this end, we repeated the aforementioned analyses after excluding from our sample all women that were advised by their gynaecologist to bed rest.

Pregnant women reported significant changes in their physical activity during pregnancy related to several activities. This was observed in all domains, including household related activities (Supplementary Table 3) and transportation related activities (Supplementary Table 4), but was more pronounced in activities for fun or exercise (Supplementary Table 2) and work related activities (Supplementary Table 5). In general, pregnant women significantly decreased their physical activity, with the only exception of slow walking for fun or exercise that was more frequent during pregnancy (p<0.01)(Figure 1). Namely, women spent less time in preparing meals and light cleaning(p<0.01), heavy cleaning(p<0.01), playing with children(p<0.01 for playing while sitting or standing, and p=0.01 for playing while walking or running), quickly walking(p<0.01 for fun or exercise, p<0.01to go to places), walking quickly up hills(p<0.01), jogging(p=0.01), swimming(p=0.04), dancing(p<0.01), standing or walking slowly at work(p<0.01while carrying things, p<0.01 without carrying things), walking quickly at work (p<0.01while carrying things, p<0.01 without carrying things), and other physical activity for fun or exercise (p=0.04)(Figures 2-5). Furthermore, women reported less time spent sitting at work or class(p<0.01)but more time spent watching television during pregnancy (p<0.01)(Figure 6).  The aforementioned results were reasonably stable in a sensitivity analysis of 158 women that were never advised by their gynaecologist to bed rest due to medical indications. In particular, only the reduction of time spent in swimming and other physical activity for fun or exercise lost statistical significance. In addition, a significant reduction of time spent in dressing, bathing, and feeding children while standing was observed in this sensitivity analysis. 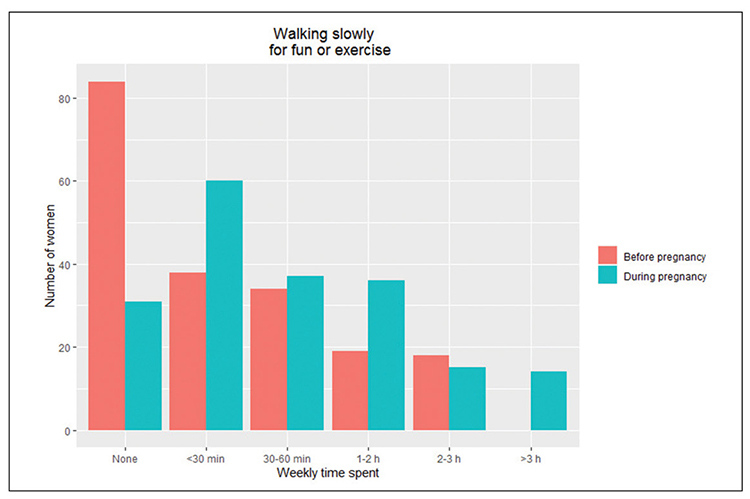 Figure 1. Weekly time spent walking slowly for fun or exercise before and during pregnancy. 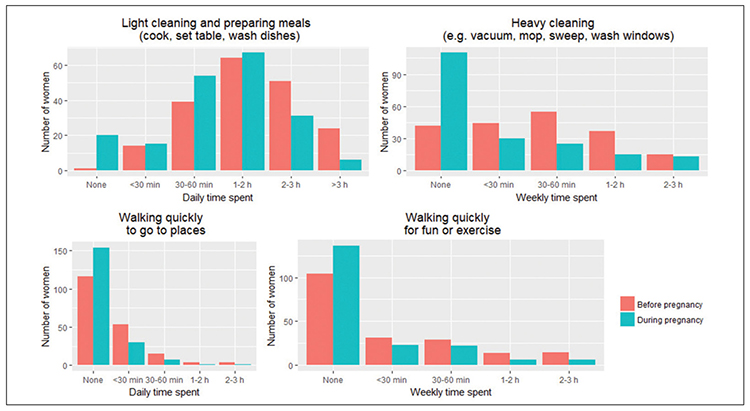 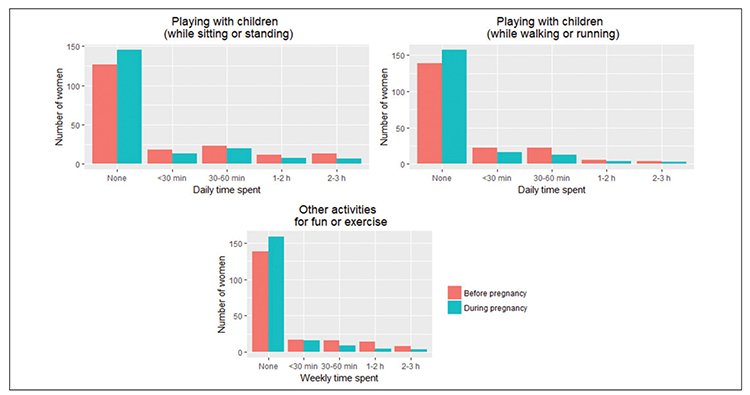 Figure 3. Daily time spent playing with children, and weekly time spent in other activities for fun or exercise before and during pregnancy. 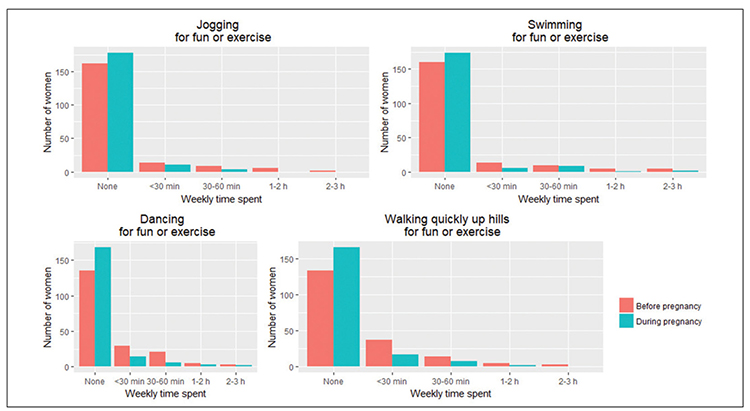 Figure 4. Weekly time spent jogging, swimming, dancing, and walking up hills for fun or exercise before and during pregnancy. 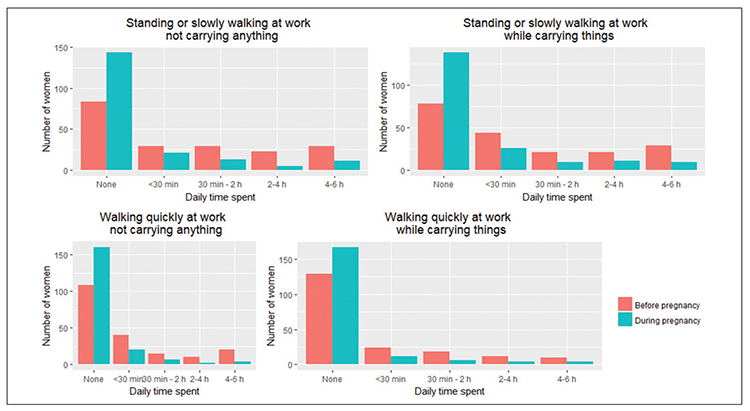 Figure 5. Daily time spent standing and walking slowly or quickly, with or without carrying things at work before and during pregnancy. 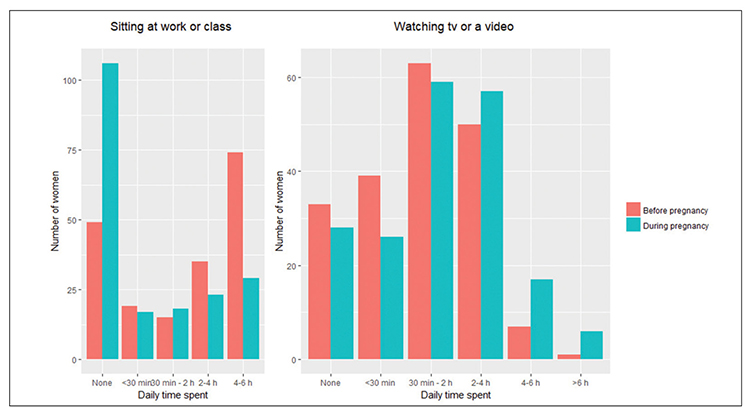 Figure 6. Daily time spent sitting at work or class, and watching television or video before and during pregnancy.

In our study population of 193 pregnant women, approximately half reported no or minimal physical activity during pregnancy and, thus, were less active than current guidelines’ recommendations. Notably, gynaecologist’s opinion regarding exercise during pregnancy was conceived as positive only by a minority of women. Overall, women were less active during pregnancy than before, although they spent more time slowly walking for fun or exercise. Finally, significant decrease was observed in all occupational activities involving slow or quick walking and lifting weights.

Physical activity during pregnancy has been associated with favourable birth outcomes, less frequent pregnancy and delivery complications, and improved maternal mental health. Nonetheless, concerns have been raised regarding potential risks both in uncomplicated and complicated pregnancies. During pregnancy an increase in joint laxity is observed, which in combination with the displacement of the centre of gravity may predispose pregnant women to musculoskeletal injuries during exercise and/or falls and traumatic injuries 25. Furthermore, exercise on the supine position may trigger hypotension due to compression of the inferior vena cava by the gravid uterus, and is not advised during pregnancy 26. Finally, exercise’s safety is debated in a wide range of medical conditions during pregnancy; such are anaemia, hypertension, preeclampsia, cervical insufficiency, vaginal bleeding, placenta previa, premature uterine contractions, and premature rupture of membranes4. In presence of the aforementioned medical conditions, most guidelines advise against physical activity during pregnancy 4; in line with these guidelines, 18.1% of women participating in our study were advised to bed rest by their gynaecologist for various reasons.

Notwithstanding our findings, this study had several limitations. The sample size was relatively small and women were recruited in a single-centre. Furthermore, since the study was conducted in a private maternity hospital located in the capital city of Greece, our sample might differ from the general population in Greece with regards to socioeconomic position. Giving birth in a private facility has a cost that is not affordable by a proportion of Greek population; therefore, we expect that physical activity and exercise habits of such women may not be well described by our study results. In addition, occupational differences from the general population might also exist. Agricultural and livestock occupations are expected to be underrepresented in our sample, since such occupations are more frequent in Greek countryside rather than the capital city. Similarly, manual occupations might be underrepresented, as they are more frequent among women of lower socioeconomic position. Last but not least, to our knowledge PPAQ has never been used and validated in Greece before. In spite of our efforts to ensure the internal consistency of the translated and adapted study questionnaire, external validation was not feasible.