Pubic symphysis diastasis in pregnancy is a rare obstetric complication. A case of a 35 year old primigravid woman with severe pubic symphysis diastasis and sacroiliac joint relaxation during non-operative vaginal delivery is reported and the literature reviewed. The patient was successfully treated by open reduction and internal fixation with plate and screws. During a 5 year follow-up, the patient presented with no pain and complete recovery to pre-injury functional level. Early diagnosis and immediate intervention by pelvic stabilization and in severe cases surgical intervention are the key points for the management of pubic symphyis diastasis, which optimize the maternal outcome.

Pubic symphysis diastasis is recognized as a serious and under diagnosed obstetric problem. The reported incidence varies widely, from 1 in 300 pregnancies to 1 in 30.000 pregnancies1. These differences in incidence might be due to ethnic origins and the physician’s awareness2.

Although numerous theories have been proposed, the pathogenesis of the condition is still unclear. It seems likely to be multi-factorial in origin4. In most cases, the pregnancy-induced hormonal and physical changes increase the risk of musculoskeletal problems in pregnancy and are the main causes for pregnancy-related pelvic ring disease, including the separation of the pubic symphysis and sacroiliac joints. During pregnancy, high progesterone and relaxin levels produce physiological ligament relaxation on the pelvis5.

In most cases, the pubic symphysis diastasis is usually an incidental radiological finding during pregnancy and delivery. Predisposing factors contributing to diastasis of the pubic symphysis both antenatally and postnatally are poorly defined. These factors include multi-parity, advanced maternal age, macrosomia, cephalopelvic disproportion, malpresentation, prior pelvic trauma, use of the McRoberts maneuver, a rapid second stage of delivery, or application of forces to abduct the thighs under epidural anesthesia, might have a role in the development of pubic symphysis diastasis occurred after spontaneous vaginal deliveries2,6.

The separation of pubic symphysis following vaginal delivery causes potential instability in the joint7. The severity of this condition varies from mild self-limiting pain to significant morbidity affecting the quality of life by causing functional limitations to pregnant women4. Women present with inability to weight bearing owing to severe supra-pubic and groin pain and to perform any movement in the bed which involves hip abduction. In the most severe cases, it may be accompanied by urinary dysfunction and inability to walk post partum8.

A 35-year-old woman (gravida 1, para 0) with an uncomplicated prenatal course, at nearly 40 weeks’ gestation underwent a spontaneously vaginal delivery. A 3200gr girl was delivered with Apgar score 10 at 1 and 5 minute, respectively.

After an otherwise normal delivery, she complained immediately of severe acute-onset anterior pubic pain radiated to the right buttock and thigh and difficulty in walking. Clinical examination was undertaken using iliac crest compression and pubic symphysis palpation to verify pelvic ring stability and to investigate for diastasis between pubic rami. It revealed a large symphysis gap and the persisted postoperative pain in the hip and groin that was exacerbated with weight bearing and by any leg movement such as abduction and adduction at both hips. The diagnosis of pubic symphysis diastasis was confirmed by an anterior-posterior (AP) pelvic X-ray showed a pubic separation of 10 cm and a widening of the right sacroiliac joint (Figure 1). 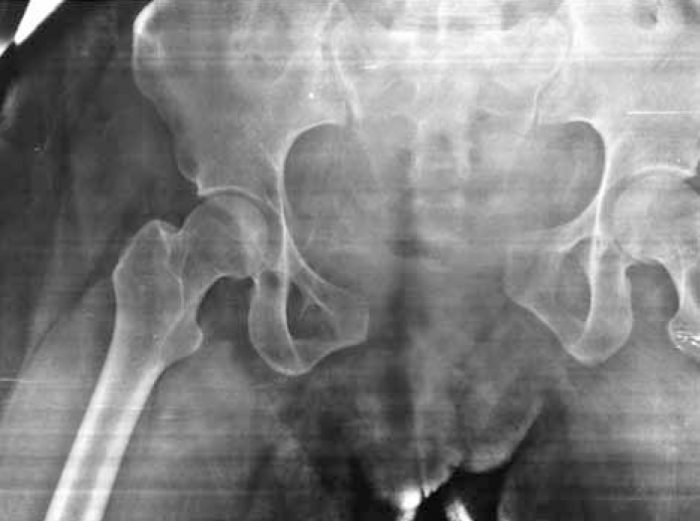 Figure 1. Pelvic X-ray in antero-posterior (AP) view shows the postpartum pubic symphysis diastasis. It exist abnormal widening of the symphysis pubis to a maximal transverse measurement of 10cm. There is right sacroiliac joint widening and moderate vertical displacement of the left superior pelvis.

Initially, simple intravenous analgesics were prescribed, but the pain remained intense and uncontrolled. The patient was hemodynamically stable. However, later she developed important perineal-labia major edema and hematoma. The patient was treated initially conservatively with bed rest, and pelvic stabilization with a circuferemtial pelvic binder (sheet) applied at the great trochanter level in order to perform pelvic ring closure and to prevent hemorrhage due to pelvic venous plexus injury (Figure 2). Thromboprophylaxis with graduated stockings and daily subcutaneous low molecular weight heparin were instituted due to decreased mobility of the patient. 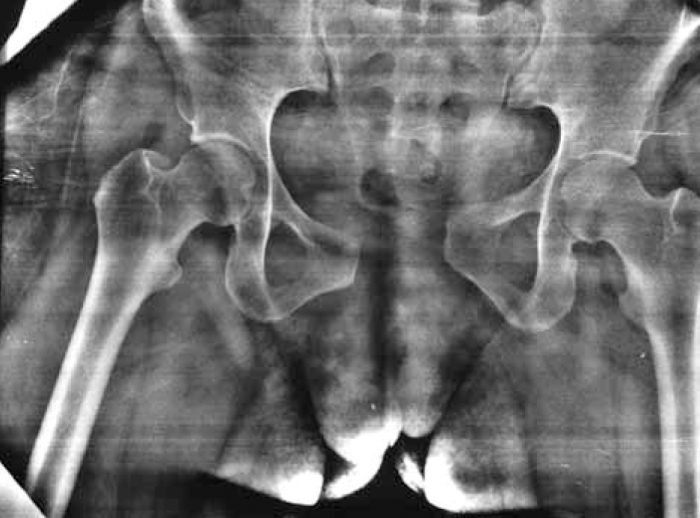 Figure 2. Pelvic X-ray in antero-posterior (AP) view demonstrates marked reduction of the pubic symphysis diastasis after the use of circumferential pelvic binder.

Consultation with an orthopedic surgeon was performed. After neither of these symptoms improved significantly in response to conservative management, surgically management was indicated. Due to severe pubic symphysis disruption, the sheet application over the iliac crest remained until she surgically substituted by an internal fixation. One week later, the patient underwent open pubic symphysis reduction with internal fixation using small fragments reconstruction plate and screws via Pfannestiel incision. The plate was placed over the rami (superior position). A percutaneous sacroiliac screw was also placed to close and stabilize the right joint and to promote sacroiliac osteosynthesis, (Figure 3).  No complication followed surgery. 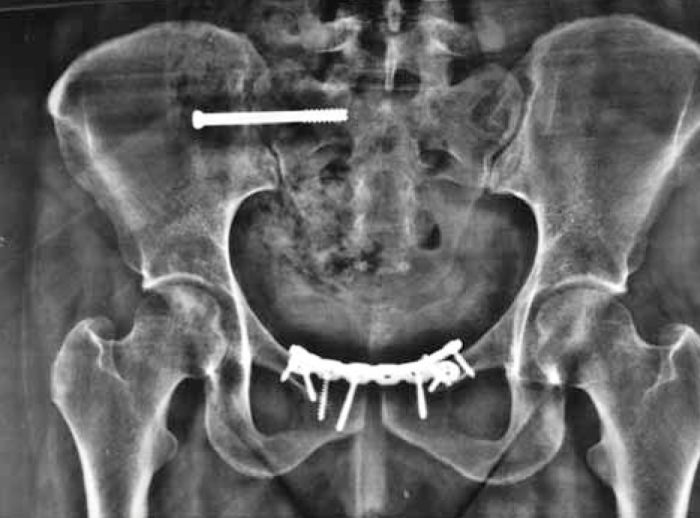 Ambulation was forbidden during the first 6 weeks. Afterwards, the patient started physical therapy and early mobilization. Assessment by the orthopaedic team found the patient to be in good health.

After, 2 year period, she delivered by cesarean section a 3400 gr male without any perinatal complications. During a 6 year follow-up, the patient presented with no pain and full recovery to pre-injury functional level.

This study was conducted after an informed consent was obtained by the patient.

Pubic symphysis diastasis is a rare intra-partum obstetric complication which it may lead to significant maternal morbidity. Therefore, it requires a fast and specialized management approach to improve clinical and functional outcomes to the women10.

A high index of suspicion and observation of the patient by the clinician’s is needed for early diagnosis and management to prevent complications such as severe pelvic pain and instability which may persist for many years. The definitive diagnosis of this entity is based on clinical findings as well as radiographs of the pelvic girdle, which shows diastasis of the pubic symphysis and separation of the pubic rami6. Recently, reports in the literature, advocate that the use of 3D transperineal ultrasonography and magnetic resonance imaging (MRI) scan appears to be superior to pelvic x-ray in the measurement of symphysis pubis diastasis, recognition of the soft tissue injury and monitoring the follow up of patients11-12.

Currently, there is no international consensus in the literature on definition, diagnostic criteria, and management of symphysial pelvic dysfunction in pregnant women13. Generally, non-operative management seems advisable in mild and uncomplicated cases and should be based on multidisciplinary approach14. In most cases, conservative management comprising pelvic stabilization with a pelvic binder, analgesia and rest in the lateral decubitus position, it is a reasonable method of management if the diastasis of pubic symphysis is less than 25 mm4. It is vital to minimize the prolonged immobilization of the patients in order to avoid possible complications, such as thromboembolism, decubitus ulcers, pneumonia, urinary tract infections, neuropathy and muscle atrophy15. Previous studies showed clinical improvement and full recovery within 6 weeks with conservative treatment and early mobilization16,17, but can take up to 4-6 months in some cases3,7. The use of physiotherapy, including lumbopelvic and pelvic-floor stabilizing and strengthening exercises as the main component of conservative treatment showed that for the majority of women with symphysis pubic diastasis tend to have complete resolution of signs and symptoms in a short-time period18.

Although conservative treatment of pubic symphysis diastasis is successful in most cases, surgical intervention may be needed to preserve the integrity of the joint in cases of persistent, wide separation (>4 cm), recurrent diastasis, intractable symptoms, and open rupture6,13. Early consultation with an orthopedic surgeon in these cases is encouraged as in our case. Due to failure to progress in reducing pubic symphysis diastasis by conservative methods and instability of sacroiliac joint we proceed to invasive method of treatment.

Aggressive treatment of severe pubic symphysis diastasis with external fixation resulted in early ability to ambulate, void, and care for self and baby1. However, external fixation is an alternate method of management that has not received significant attention in the literature up to date7.

To date, most surgical procedures for reduction of pubic symphysis diastasis have been via internal fixation with plates and screws on the superior pubic rami. They are well-known and safe procedures and allowed a full functional recovery of the patients6,7,13. Minimally invasive sacroiliac joint screw fixation is required in cases of combined posterior pelvic girdle lesions13. Although internal fixation provides good structural support, this method would be inadequate when multiple organ systems are involved. In these cases due to risk of soft tissue infection or osteomyelitis, a coordinated multidisciplinary approach to management is necessary8.

In case of subsequent pregnancy, mode of delivery will have to be discussed due to traumatic past and maternal fear of recurrence. Recurrent separation of the symphysis pubis could occur during subsequent deliveries but generally is no worse than the first occurrence19. However, few data are available in the literature and risks of recurrence are not well-defined20. Furthermore, issues regarding plate implant removal have not been clearly addressed and no specific indications have been proposed in the literature21.

A severe pubic symphysis diastasis is a potential obstetric complication with serious consequences for the women’s quality of life, requiring immediate treatment and follow-up.  There is a paucity of information in the literature to guide its management. So, there is an urgent need to introduce new criteria for early recognition and appropriate treatment strategies.