Introduction: Breastfeeding is the unparalleled way to provide infants the ideal nutrients they need for their healthy growth. The World Health Organization (WHO) recommends exclusive breastfeeding until 6 months old, starting within 1 hour of birth. All infants should start receiving foods in addition to breast milk from 6 months onwards, while breastfeeding continues until 2 years old or more.

Purpose: The purpose of this study is to investigate those factors that may influence the onset of breastfeeding in the first few days after birth and during the hospitalization in the maternity ward, as well as the establishment of breastfeeding 6 weeks after birth, along with studying the weight of the newborn.

Material and Method: This was a prospective study with a convenience sample taking place in the General Hospital of Argolis and the Elena Venizelou maternity hospital in Athens. In the presented pilot study 75 women that delivered at full term completed the questionnaire. We chose to exclude women that delivered during the preterm period as well as those that delivered twins as these factors independently affect the possibility of discontinuing breastfeeding. A self-report questionnaire with closed and open-ended questions was used and was completed in two phases.

Results: Overall, 75 women completed the questionnaire. Of those 3 women delivered within the early term period (37+0 – 38+6 weeks). The majority of women (74.67%) initiated breastfeeding within 2 hours from delivery.  Rooming in was allowed within the first hour in a large proportion of participants (62.67%). Breastfeeding difficulties were encountered in approximately half of participants and the predominant reason was some form of breast pathology. Twenty-two mothers (29.3%) discontinued breastfeeding within the study period. Early rooming in significantly increased the possibility of continuing breastfeeding after the first month. Of all the factors that were investigated during the puerperal period only the amount of formula meals significantly affected the rates of continuous breastfeeding.

Conclusion: Early rooming-in significantly increases breastfeeding practices. Unstructured educational activities from healthcare providers and accompanying brochures do not seem to enhance breastfeeding duration, indicating the need for adoption of specific programs that will be tested in forthcoming studies.

Breastfeeding, is considered to one of the most determining factors for the physical and neurological development of the newborn and the infant. It provides infants with the active and nutritious ingredients to grow in the first months of life and continues to meet their nutritional needs, even when complementary feeding is started. Promotes cognitive development, protects against chronic and infectious diseases, reduces infant mortality and helps in faster recovery during illness. In the Greek population the duration of breastfeeding has been directly related to cognitive, language and motor development at 18 months of age1. It also contributes to the health and well-being of mothers by reducing the risk of breast and ovarian cancer and creating a time gap between births. The World Health Organization (WHO) recommends exclusive breastfeeding for the first 6 months of an infant’s life followed by partial breastfeeding until the age of 2 or more.

The aim of our study was to investigate those factors that affect the onset and consolidation of breastfeeding.

We designed a prospective cohort study that assessed the impact of maternal, paternal and neonatal characteristics on breastfeeding duration. The study was approved by the institutional review board of Attikon University Hospital of the National and Kapodistrian University of Athens. The study was conducted in 2 hospitals: 1) the General Hospital of Argolis (a suburban hospital that serves a suburban and urban sample of the Greek population) and, b) Elena Venizelou Maternity hospital (an urban tertiary referral center established in Athens). In the presented pilot study 75 women that delivered at full term completed the questionnaire. We chose to exclude women that delivered during the preterm period as well as those that delivered twins as these factors independently affect the possibility of discontinuing breastfeeding. A self-report questionnaire with closed and open-ended questions was used and was completed in two phases. Initially, the questionnaire was completed on the day of discharge and the women were again interviewed, by telephone or e-mail, during the 40th day of the puerperium.

Statistical analysis was performed in IBM SPSS (IBM Corp. Released 2015. IBM SPSS Statistics for Windows, Version 23.0. Armonk, NY: IBM Corp.). The normality of distribution was evaluated using the Kolmogorov Smirnov test and graphical methods. Univariate analyses were performed to evaluate the impact of health worker characteristics on the likelihood of suggesting the vaccination in pregnant women as well as women that wish to conceive naturally or with assisted reproduction.

Overall, 75 women completed the questionnaire. Of those 3 women delivered within the early term period (37+0 = 38+6 weeks). Employment, educational and other relevant parental characteristics are briefly presented in Table 1. Of note, however, none of the 2 mothers that completed only the elementary school continued breastfeeding, while the lowest rate of discontinuation of breastfeeding (1/6, 16.6%) was observed among mothers with postgraduate studies. Also 3 of the 5 mothers who lived on an island (60%) stopped breastfeeding. The predominant reasons for continuation of breastfeeding were: i) perception of benefit for the offspring (92%), ii) perception of enhanced maternal-neonatal bonding (49.3%), iii) economic reasons (13.3%) and iv) perception of positive influence of breastfeeding on maternal health (32.0%).

Concerning parental characteristics, inferential analysis revealed that none of them significantly affected the risk of discontinuation of breastfeeding (Table 4). On the other hand, early rooming in significantly increased the possibility of continuing breastfeeding after the first month (Table 5). Of all the examined maternal and neonatal pathologies that could affect breastfeeding rates, only the diagnosis of respiratory distress syndrome in the neonate was close to being a significant predictor of discontinuation of breastfeeding; however, the limited population size of our study did not allow for the result to reach the predetermined level of statistical significance. 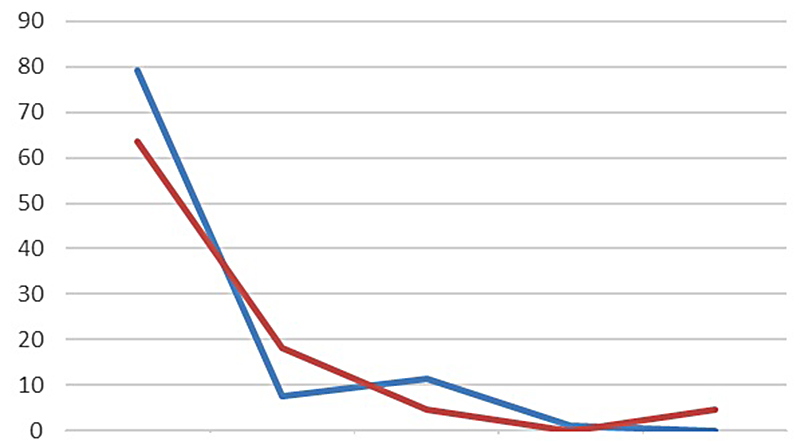 Figure 1. Breastfeeding rates per timing of initation of breastfeeding.

Likely, efforts in recent decades to promote breastfeeding and messages about the clear benefits of breast milk have influenced those women with the highest levels of education more easily. These women are also more likely to have higher socioeconomic status and better jobs, which may let them continue breastfeeding for longer8,10. Also, mothers who are knowledgeable about the benefits of breast milk for the infant and her health are positive towards breastfeeding11,12.

There is no consensus on the influence of sociodemographic factors on the initiation and duration of breastfeeding. Maternal employment, cesarean section, and hospital admission are risk factors for early discontinuation of breastfeeding. However, there is no consensus on the effect of age, number of deliveries, and education13-21. In the present study, the small number of women probably did not allow statistically significant conclusions to emerge concerning these variables, except for education. Therefore, the effect of maternal education changes with circumstances, and its influence does not remain constant over time. This has two important implications: First, we need to consider the level of education. Second, the social environment should be considered as it may shape the aforementioned factors’ influence12,22.

As far as the number of children is concerned, the results of the surveys are rather contradictory. In primiparous women, prevention for breastfeeding is associated with prenatal care by a health professional, rather than with performing or not performing a cesarean section when the mother has contact with immediately after birth (rooming-in). The successful breastfeeding experience of the previous child constitutes a positive precedent for the mother to breastfeed her new child for longer and in an exclusive way19,22,23. The woman’s decision is strongly influenced by the family’s positive experiences with breastfeeding.  Past experiences of family and friends and cultural values are also factors that influence breastfeeding initiation and duration24.

Breastfeeding is the exclusive role of women, but health professionals make a significant contribution to the success or failure of breastfeeding. In terms of health services, hospitals should implement policies that support breastfeeding, paying particular attention to limiting infant supplementation and extending professional support during hospitalization and the first weeks after birth, even though home care10,12,20.

According to UNICEF, global BF rates have stagnated since 1990, with only 36% of children under six months of age being exclusively breastfed worldwide in 2012.24 In the study by Yilmaz et al, the rate of early initiation of breastfeeding was 60.1%22. This rate is considered to be in the ‘good’ group according to the WHO classification [poor (0-29%), moderate (30-49%), good (50-89%) and very good (90-100%)24. The percentages were similar in the present study. The present study results compared to UNICEF can be explained by the fact that the clinics were located in an urban area serving a relatively better income group that has a higher rate of antenatal care and breastfeeding education than other areas of our country.

A randomized controlled trial (RCT) (which included 176 mothers of infants) conducted in Russia showed that rooming-in significantly increased the rate of exclusive breastfeeding at discharge (4th day postpartum).  The study included mother-infant pairs only after normal delivery and did not report whether there were any events such as infections. However, there is insufficient evidence to conclude the effects of this on breastfeeding up to six months26. Another non-randomized study found a higher breastfeeding rate at four months for primiparous but not multi-birth women who received rooming-in27.

This study is subject to certain limitations. A self-report questionnaire was used, which may have led to over-or underestimated practices and duration of MTH, as the study included a researcher’s partner for the Athens hospital. However, sufficient time has been allocated to all women to avoid hasty responses. Also, despite the prospective nature of the study, the reassessment was limited to 40 days (postpartum period) and was related to specific parameters, which prevented the identification of causal relationships of knowledge, and attitudes towards MTH. However, one of the two hospitals where the study was conducted was located in an urban area and the study is important for highlighting the effectiveness of baby-friendly hospital practices, while the other was located in a semi-urban area, and the study sample can be considered to be dimensionally reflective of the profile of mothers in the country, however, the convenience sample of women further limits the safe generalization of the study’s conclusions. Larger prospective studies (spanning a longer period and including a larger number of women) are needed to clarify the issues related to factors affecting MTH, as well as the initiatives that need to be taken to maintain and increase these rates in our country.

This study, despite its limitations, showed that breastfeeding culture and midwifery practices can significantly influence the establishment of exclusive breastfeeding in the first months of a newborn’s life. This effect is mainly observed in women of higher educational status. It remains unknown whether women with basic educational status may actually benefit from information available in brochures or communicated by healthcare professionals; however, structured plans are needed to promote the benefits of practicing breastfeeding. Although mothers largely perceive that breastfeeding is best for baby’s health and that it promotes mother-child bonding, the rate of exclusive breastfeeding in the second month was 50.7%, with complete cessation of breastfeeding occurring in one-third of mothers.  Regular rooming-in and the mothers’ breastfeeding history favor the establishment of breastfeeding, while the systematic introduction of artificial milk in the infant’s diet and the mother’s low educational level discourage it. All of the above factors can be modified by appropriate information and education of the mother and her environment already during the prenatal period, while at the same time ensuring the correct application of midwifery practices. And herein lies the value of cooperation between the gynecologist and the midwife and the expectant mother, as well as the mother’s preparation courses during pregnancy. Indeed, during the courses in psycho prophylaxis, the expectant mother becomes familiar with the practices of lactation, fears and prejudices are dispelled and she is prepared for the difficult period of childbirth and postpartum. Although breastfeeding is a natural act,

The authors report no conflict of interest.