Aim: This study explored the impact of timing of recurrence after an initial response to standard primary treatment on the overall survival (OS) of patients with EOC.

Methods: Data was extracted from the records of patients who underwent standard primary treatment and follow-up after EOC diagnosis between January 2011 and December 2020. The Kaplan-Meier survival estimates and Cox proportional hazards model adjusted for covariates were used for analyses.

Results: The risks of recurrence of EOC increased steadily with increasing time from the start of primary treatment from 13.6% in 6-months to 71.0% after 12-months. In the final multivariate analyses, recurrence within 6 months of treatment was a significant independent predictor of poor OS in EOC patients (hazard ratio=7.23, 95%CI: 3.87–13.51, P<0.01).

Conclusion: Our study suggests that recurrence within 6-months is an important prognostic predictor of poor OS in EOC. Early tumour recurrence may be a useful surrogate of OS and thus this information should be considered in the design of future tailored randomized controlled trials. Future strategies to improve OS in EOC patients should focus on identifying effective measures to prevent early tumour recurrence.

Ovarian cancer is the second most common gynecologic malignancy after cervical cancer in Nigeria.1,2 In 2020, there were 313,959 new cases and 207,252 deaths from ovarian cancer worldwide and by 2040, these numbers are expected to rise by almost 37% to 428,966 new cases and by 50% to 313,617 cancer deaths.3 Up to 90% of ovarian cancer are of epithelial origin (EOC)4–6 with an overall 5-year survival rate of 30–48% despite the standard surgery and chemotherapy treatment.7 To improve overall survival (OS) in EOC, it is important to provide personalized care such as the institution of more intensive and individualized follow-up surveillance plans8 to women who responded to the standard primary treatment with surgery and platinum-based chemotherapy.7 Therefore, it is extremely valuable to design a risk-stratification approach based on certain patient and tumour characteristics to identify the major predictors of the gold-standard survival endpoint (OS) in patients with EOC.9

The outcome of EOC patients is generally poor after recurrences, with a low response to subsequent chemotherapy and/or surgery and an estimated median survival of that is less than 12 months.10 However, this is unpredictable and can vary from study to study.8,10,11 Over 70% of patients managed for EOC will experience recurrence within 2 years and about two-thirds of these will occur within 12-months of treatment.12 Timing of recurrence of EOC after an initial remission is an important indicator of the degree of response of the tumour to treatment,12 however, it remains unclear if the timing of recurrence will predict survival outcomes. It, therefore, becomes imperative to conduct research that will examine and control for the influence of possible confounding factors on the relationship between the timing of tumour recurrence and OS in EOC patients. To bridge this important knowledge gap, our current study, analysed a cohort of EOC patients managed over 10 years in a gynecologic oncology unit of a tertiary hospital in Lagos, Nigeria to determine the impact of timing of recurrence after a period of remission of on the OS of these patients.

This was a retrospective cohort study of 176 patients diagnosed with EOC and who had standard primary treatment followed by at least 3-years of follow-up between January 2011 and December 2020 at the gynecologic oncology unit of a university teaching hospital. The teaching hospital is a multi-specialities referral centre that provides services to over 25 million residents of Lagos and parts of its surrounding States of Ogun and Oyo in Southwest Nigeria.

Data of the 176 women who met the eligibility criteria were retrieved from the in-patient register and medical case records in the gynecologic oncology unit of the hospital. Criteria for inclusion of women in the study were: 1) confirmation of EOC by histopathology, 2) completion of a full course of standard primary treatment consisting of either primary debulking surgery (PDS) and postoperative adjuvant chemotherapy (ACT) or preoperative neoadjuvant chemotherapy (NACT), interval debulking surgery (IDS), and postoperative adjuvant chemotherapy (ACT), 3) patients with complete medical records and laboratory test results required for data analyses. We excluded women who: 1) failed to complete the standard primary treatment, and 2) had severe postoperative complications that required prolonged admission in the high-dependency or intensive-care unit.

Relevant data of eligible women such as age, menopausal status, parity, pre-existing medical comorbidity (including diabetes mellitus, hypertension, liver, and kidney disorders), body mass index (BMI) defined as body weight in kilograms divided by the square of height in meters, serum cancer antigen 125 (CA-125) levels, International Federation of Gynecology and Obstetrics (FIGO) stage of the disease, presence of ascites and histologic subtype of the tumour were collected using a proforma designed for the study. The mortality data were collected after 3 years of treatment completion until December 2020.

In this study, we defined standard primary treatment as a full course of treatment consisting of either PDS and 6-cycles of platinum-based postoperative ACT administered intravenously every 3 weeks or IDS in-between 3 to 4 cycles each of platinum-based preoperative NACT and postoperative ACT administered intravenously every 3 weeks.7 Tumour recurrence was the presence of any clinical or radiological evidence of the disease after an initial response to the standard primary treatment. A detectable disease was defined as the clinical evidence of a tumour on pelvic examination; and/or the radiological presence of a new pelvic tumour on abdominopelvic USS or CT scan with or without abnormal (>35 IU/ml) or increasing serum CA-125 levels.12 The study endpoint, overall survival (OS), was defined as the length of the time from the start of primary treatment that the patients diagnosed with EOC were still alive.8,9 The OS data were censored after a 3-year follow-up until December 2020.

SPSS statistical computing software version 27 (IBM Corp., Armonk, NY, USA) for Windows was used for data analyses. Patients’ sociodemographic and clinical characteristics were computed using descriptive statistics. Categorical variables were presented as frequencies and percentages while continuous variables were presented as mean (± standard deviation) if normally distributed or median (interquartile range) if skewed. The mean or median values of age, BMI and serum CA-125 levels were used as the stratifying cut-off values in the univariate and multivariate analyses. Kaplan-Meier analysis was performed to estimate the OS after recurrence and the group difference in survival function was compared using the Log-rank (Cox-Mantel) test. The hazard ratios (HRs) of death at a 95% confidence interval (CI) were estimated for all patients’ characteristics in a predictive model using the Cox proportional hazards analyses to adjust for covariates. The adjusted multivariate models included age and other variables with P<0.20. P <0.05 was reported as statistically significant.

Ethics approval was obtained from the hospital’s Ethics Committee (ADM/DCST/HREC/1912) before commencing patients’ medical records retrieval and data collection. Strict adherence to the confidentiality of collected information was ensured throughout the study and reporting of findings. 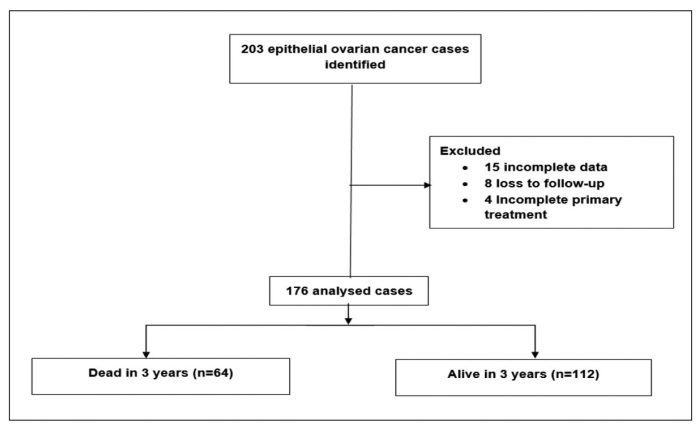 Using a Kaplan-Meier estimate that stratified the patients into two groups based on their timing of tumour recurrence [Figure 2], recurrence within 6 months of completion of primary treatment had a statistically significant association with OS (P<0.01). In addition, based on a predefined value of P<0.20 as shown in Table 2, parity (P=0.16), menopausal status (P=0.17), BMI (P=0.02), type of upfront primary treatment (P=0.17), ascites (P=0.01), FIGO stage (P=0.03), and surgical debulking status (P=0.10) were associated with OS. However, following adjustments for these covariates in the final multivariate analysis, recurrence within 6 months of treatment was recorded as a significant independent predictor of poor OS in EOC patients (HR=7.23, 95%CI: 3.87–13.51, P<0.01) [Table 3]. 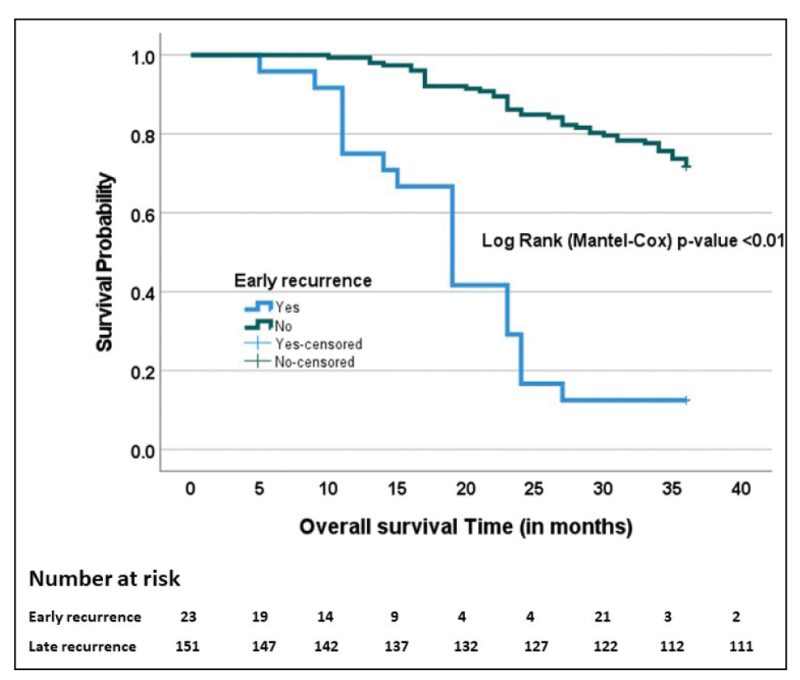 Epithelial ovarian cancer is the most lethal gynecologic cancer13 due to its late diagnosis and frequent recurrences.12,14 Early recurrence of epithelial ovarian cancer (EOC) is relatively uncommon and therefore, reports on the outcomes of this group of patients are limited. Although it is well recognized that the prognosis is poor for women with recurrent disease, it remains unclear if the timing of recurrence will predict survival outcomes. Our study found a 6-month recurrence and mortality risks of 13.6% and 36.4%, respectively. Only early recurrence was recorded on multivariate analysis as an independent prognostic predictor of poorer OS.

OS in patients with EOC has been associated with various patients’ specific clinical and tumour characteristics.15,16 However, only a few studies have examined the direct impact of timing of recurrence on the survival of EOC patients,17 and consistent with previous findings, our study confirmed tumour recurrence within 6-months as an important independent predictor of OS in patients with EOC. Women who had treatment for EOC are generally at risk of having recurrences at some point after remission12,18 with over half of these occurring within 12-months of treatment.12 However, there are worldwide variations in the rates of recurrence in EOC18–20 but the patterns of mortality remain almost similar despite standard treatment with surgery and chemotherapy.8,21,22 This may be explained by the predominantly late presentation of patients due to the insidious nature of the disease and its non-specific symptoms which may mimic other conditions23,24 such as abdominal swelling or bloating, pelvic or abdominal pain, unexplained weight loss, changes in bowel habits, early satiety or loss of appetite, and increased urinary frequency or urgency.23

The study may be limited by the 3-year follow-up period adopted for mortality assessment which may be too short, and thus may account for the relatively high OS recorded. Secondly, this is also a single institutional study in an urban setting, and thus, the findings may not be generalized to other institutions especially those in rural locations. Lastly, the study did not capture or control for the possible effects of any additional or secondary treatment received by patients after the diagnosis of recurrence on the study endpoint, OS. However, these patients underwent primary surgery and staging by gynecologic oncologists in a multi-disciplinary team setting. In addition, a central pathology review by expert gynecologic oncology pathologists was used in the analysis of the surgical specimens obtained during the period under review.

Our findings suggest that recurrence within 6-months is an important prognostic factor that predicts poor OS in EOC. Early tumour recurrence may thus be a useful surrogate of OS and thus this information should be considered in the design of future tailored randomized controlled trials. Furthermore, as recurrent EOC is not a curative disease, future strategies to improve OS in EOC patients should focus on identifying effective measures to prevent early tumour recurrence.

We appreciate the invaluable assistance of the staff of the gynecologic oncology division of the hospital’s medical records department without whom access to the patients’ medical records would not have been possible. We also acknowledge the immense contribution to the data retrieval and collation by resident doctors in the oncology and pathological studies unit of the obstetrics and gynaecology department.

The authors have no conflicts of interest.