Objective: to determine the long term risk of hysterectomy following balloon endometrial ablation. Design: retrospective cohort study. Setting: A teaching university NHS hospital(Queen Elizabeth The Queen Mother Hospital. Methods: Patients having balloon endometrial ablation  were prospectively recorded in an operating room log-book between 2001 to 2016. This logbook was used to search the pathology laboratory database (Dart and Apex) to identify patients who required a hysterectomy. Results: 796 patients underwent BEA at QEQM Hospital in Margate. The patients’ age was between 25 to 60 years. A hysterectomy was subsequently performed in 166 women (20.85%). The risk of hysterectomy was higher among the 40-50 age group. The shortest time to hysterectomy was 1 year and the longest was 10 years. Conclusion: The risk of having a hysterectomy after endometrial ablation in this study was 8.7% in the first year after the ablation and this risks drop to 3.5% in 2 years after the ablation. There was 20.85% failure rate of endometrial ablation using thermachoice, and this raise the question about the effectiveness of other devices which use ballon ablation like thermablate, cavaterm and librata.

Abnormal uterine bleeding is a common presenting symptom it affects about 20% of childbearing age, approximately 5% of women aged 30 to 49 years will seek medical care each year1.

A detailed history, complete physical and pelvic examinations and appropriate blood tests is required to enable the physician to rule out other causes of bleeding such as pregnancy and any disorders related to it, iatrogenic causes, systemic conditions and genital tract pathology.

Dysfunctional uterine bleeding is diagnosed by exclusion of these other causes2, 3.

When this medical treatment is ineffective or refused by patients, surgical treatment will be the next option especially if fertility is not an issue5, 14.

Initially, hysterectomy was the only choice for patients but in the 1980, targeted Destruction or excision of the endometrium under hysteroscopic guidance was introduced14. However, hysteroscopic endometrial ablation requires additional training and a surgical skill.

This led to the introduction of a number of  non-hysteroscopic controlled devices, aimed at achieving endometrial destruction. These devices use different energy sources such as hot liquid systems, microwave, bipolar radiofrequency, laser or cryotherapy16.

Most studies on a Foley catheter balloon filled with boiling water show an increased success rate in patients over 40.7, 10, 11, 12, 13

The Thermablate system consists of a disposable, prefilled catheter-balloon cartridge and a reusable hand-held treatment control unit (TCU) that runs on direct current and is responsible for heating the liquid in the cartridge.

Hot fluid is pushed through the catheter into the uterine balloon by a pneumatic pump.

Treatment time, pressure, and temperature, as well as safety checks are microprocessor controlled by the TCU.

The cervix is dilated up to 6-7 mm to allow introduction of the catheter. The temperature is at 173ºC, pressure is at 200 mmHg, and treatment time is 128 seconds.

For Thermablate, the range for uterine length should be between 7.5 and 10cm.

Hysterectomy should be considered only when:

– Other treatment options have failed, are contraindicated or are declined by the woman.

– There is a wish for amenorrhoea or no longer wishes to retain her fertility.14

– The patient requests it and in this case it should be considered after appropriate counselling.

A retrospective analysis of all the patients who had endometrial ablation at Queen Elizabeth the Queen mother Hospital (QEQM hospital) in the last 10 years . 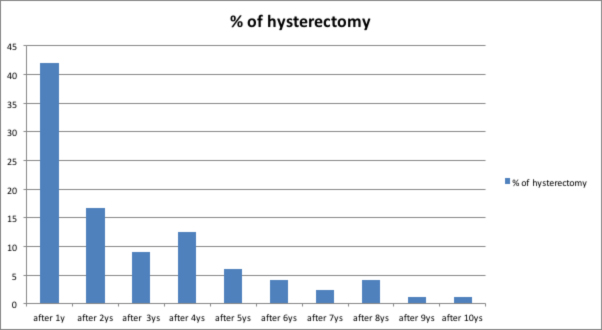 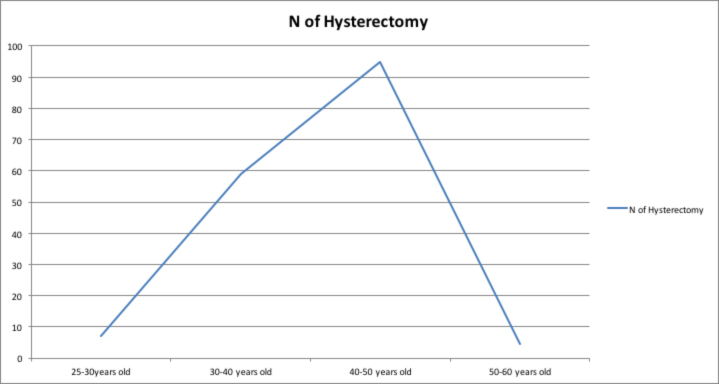 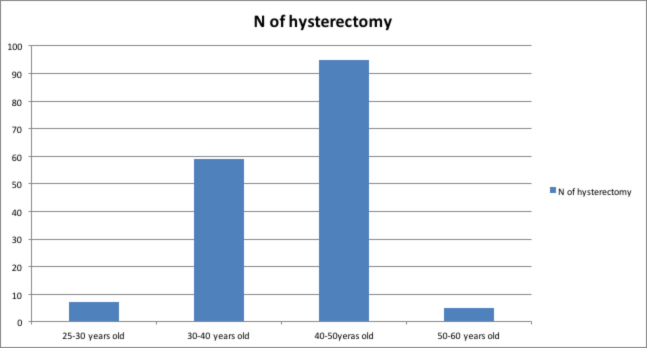 The data collected using our local record books at the Day Surgery Unit, as well as our lab records for the histology results.

166 patients about 20.85% had hysterectomy following their endometrial ablation.

The majority of the patients 42.1% who had hysterectomy were done 1 year after the ablation.