Complex adnexal cystic masses in women of reproductive age should be carefully evaluated before the final diagnosis is set. Adnexal cystic masses are not necessary malignant. On the contrary, they usually refer to a benign and not cancerous pathology. A certain benign pathology behind adnexal masses is endometriosis. Endometriosis occurs in 10-15% of women of reproductive age and presents great diversity both in the way it manifests and in its location. We report a case of a multiparous woman of reproductive age that was referred to our clinic due to abdominal and back pain. The imaging examinations revealed a cystic mass of the left parametrium that was laparoscopically removed. The histopathology set the diagnosis of endometrioma. The aim of our work is to highlight the endometrioma of the retroperitoneal space as part of the differential diagnosis of the cystic masses of the parametrium.

Adnexal masses have a wide etiology. Both gynecological and non-gynecological pathologies may be the reason of cystic adnexal masses. Ectopic pregnancy should be excluded in women of reproductive age. In patients reporting abdominal and pelvic pain, ovarian cancer must be ruled out and Ca-125 serum levels should be measured in order to exclude different possible pathological entities. In women of reproductive age, endometriomas should also be part of the differential diagnosis of adnexal masses1. Endometriosis is a common benign entity affecting 10-15% of females during the reproductive age and presents great diversity both in the way it manifests and in its location2,3.

We report the case of a 45-year-old premenopausal multiparous Caucasian female, with a free medical history, who was referred to the surgical clinic of our hospital, due to left abdominal pain and low back pain.

During clinical examination signs of inflammation or bowel obstruction were absent. Mild pain was revealed at deep palpation of the left lower quadrant of the abdomen. Her temperature was normal and the patient did not report any other symptoms.

On Computed Tomography (CT) of the abdomen, a cystic-textured thin-walled formation was found in the left parametrial space with a maximum diameter of about 6cm, with a diaphragm, which presents a mild outline after intravenous administration of a contrast agent. The cystic mass was expanding at the left parametrium space and was exerting pressure on the left ureter resulting in dilatation of the left renal pelvis and the upper part of the left ureter. Abdominal Magnetic Resonance Imaging (MRI) revealed a lesion with predominantly cystic texture and hemorrhagic content, measuring 6x6x7cm, at the anatomical position of the left ovary. The lesion presented a thickened wall with pathological enrichment after intravenous administration of paramagnetic contrast material and a reinforced diaphragm, which divided the lesion into two separate parts. These imaging findings were suspicious of possible development of primary cancerous pathology. The tumor markers were negative and the rest of the laboratory examinations had values ​​within normal range.

Following the above, the patient was referred to the gynecology department of our hospital and an exploratory laparoscopy was conducted. Exploratory laparoscopy revealed the presence of a large endometrial cyst of the left ovary, which extended retroperitoneally, as well as a few foci of endometriosis at the pouch of Douglas. The endometrioma was excised along with the left ovary, laparoscopically, after its detachment from the left ureter and the mesosigmoid and was sent for histologic examination. Endometriotic lesions of the pouch of Douglas were burned away. Histological analysis confirmed the diagnosis of endometriosis.

The patient was discharged from hospital the day after surgery, without any postoperative complications and 24 months later she remains asymptomatic.

Adnexal masses are common in women of all ages and have a variety of etiologies. Ovarian masses are the most common type, appearing in up to 35 % of premenopausal women4. These may be asymptomatic or present with a number of symptoms that vary widely depending on the underlying etiology. In our case, left abdominal pain and low back pain were the reason that the patient sought out medical attention.

A diagnostic evaluation is required in patients with an adnexal mass, which includes a thorough medical history (menstrual history, onset and type of symptoms, pain characteristics, history of infertility, cancer risk factors), physical and pelvic examination, laboratory tests and imaging studies. Transvaginal ultrasound (TVUS) should be the first-line imaging study for evaluating an adnexal mass. In our case, the TVUS was omitted as the patient underwent a CT and MRI of the abdomen as per the recommendations of the attending surgeons and she was only later referred to the gynecology department (Figure 1, Figure 2). The imaging results revealed a complex mass, suspicious for malignancy, even though serum tumor markers, including CA-125, were within normal range. Furthermore, they revealed that the mass was expanding at the left parametrium space, exerting pressure on the left ureter resulting in dilatation of the left renal pelvis and the upper part of the left ureter, which could explain the low back pain of the patient. 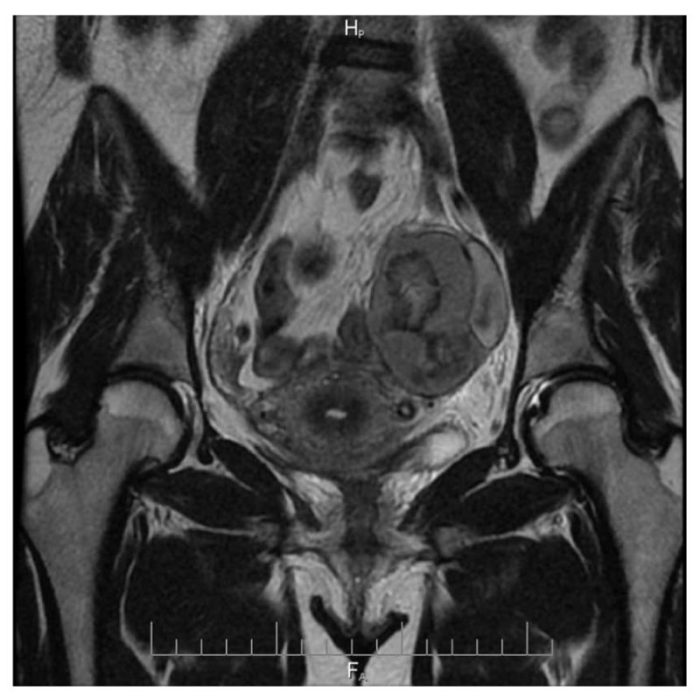 Endometriosis, a common but complex pathological entity, is defined as endometrial glands and stroma that occur outside the uterine cavity. Endometriomas may present with a wide range of symptoms depending its locations and size and laparoscopy has been considered to be the gold standard evaluating and diagnosing endometriosis2,3. Patients typically present during their reproductive years with symptoms, most commonly pelvic pain (including dysmenorrhea and dyspareunia), infertility, or an ovarian mass5,6 . Endometriomas are often densely adherent to close structures (peritoneum, fallopian tubes, uterus, and bowel). In our case, even though the endometrioma was relatively small (approximately 6 cm in diameter), it extended retroperitoneally causing pain symptoms due to pressure on the left ureter. In cases like that, laparoscory is often challenging as it requires careful detachment from the adjacent ureter and the mesosigmoid.

Endometriosis should be part of the differential diagnosis in cases of patients with pelvic and retroperitoneal masses, especially in patients of reproductive age. Surgical treatment is often challenging and requires deep anatomy knowledge and surgical experience.

Disclosure of conflicts of interest

The authors report that they have no conflicts of interest to disclose.

The authors did not receive any type of funding for the present work.

All procedures performed in studies involving human participants were in accordance with the ethical standards of the institutional and/or national research committee and with the 1964 Helsinki declaration and its later amendments or comparable ethical standards. Informed consent was obtained from all participants included in this study.