Introduction: Resection of benign, premalignant or malignant lesions of the perineum result in tissue defects, which are preferably reconstructed with a flap rather than closed primarily or covered with a skin graft. Numerous skin flaps have been utilized with varying success rates.

Patients and Methods: The charts of all female patients with perineal defects operated by the author during the past five years were retrospectively reviewed. Two flaps were used: a modified Limberg (rhomboid rotation) flap for small defects and a bilateral medial thigh V-Y advancement flap for moderate defects.

Results: Seven patients were found. Two patients were operated because of benign pathology and five because of a pre- or malignant lesion. Two small and five moderate defects resulted after the resection. All flaps survived and there were no major complications. All patients had sensation on the flap postoperatively and were pleased with the functional and aesthetic result.

A variety of vulvar/perineal and anal/perineal lesions are encountered in daily practice. The majority of them are benign or premalignant (vulvar intraepithelial neoplasia-VIN) and only a small percentage are malignant.1,2 Approximately 95% of malignant tumours of the vulva are squamous cell carcinomas (SCCs), which however represent only a fraction (ca. 6%) of all gynecological cancers. The incidence of vulvar SCC increases with age, the reported incidence being 1:100 000 in the elderly.3

Surgical excision is the treatment of choice for selected benign lesions (e.g. ectopic perineal endometriosis, nevi) and all pre- and malignant lesions. In the latter cases, wide resection is recommended, as the margin status is an important prognostic factor for disease free survival. Pathologic margin clearance of > or = 8mm in cases of squamous cell carcinoma of the vulva has been shown to lead to a high rate of loco-regional control.4,5 Furthermore, tumor size has been reported to negatively affect 5-year overall survival.5

Limited resections result in small skin defects, which can easily be reconstructed with a rhomboid flap. Wider resections necessitate larger flaps for their cover, in order to avoid scar contracture and tension, which in turn may result in functional impairment, such as vaginal exposure and deviation of the urinary stream. Two major groups of fasciocutaneous flaps are used: advancement flaps (e.g. V-Y medial thigh flap) and transpositional flaps.

In this article, we present our experience with a small case series of seven female patients in which either a rhomboid flap or a V-Y medial thigh flap was used to reconstruct perineal/vulvar defects. Technical modifications used are discussed, as a tailored procedure based on patient characteristics, size and location of the defect remains the goal of a successful reconstructive procedure.

The charts of all female patients who underwent surgical excision of a perineal lesion and flap reconstruction of the resulting defect (<10 cm) during the last five years were reviewed. Two fascio (adipo) cutaneous flaps were used to cover the defects of the perineal area, some of which extended anteriorly to the vulva or posteriorly to the anus. Small defects (<2.5 × 4.0 cm) were restored with a rhomboid rotation flap (a modified Limberg flap), which was designed adjacent to the defect (Figure 1). The skin is incised down to the fascia, the flap is dissected and rotated into the defect and sutured in layers (Vicryl 3.0 for the deep layer, Prolene 4.0 for the skin). Larger defects (<7.0 × 10.0 cm) were closed with a medial thigh V-Y advancement flap (Figures 2, 3). The skin is incised down to the fascia, which when necessary can be mobilized posteromedially. The extent of mobilization is determined according to the size of the defect. Caution is required not to injure the perforator branches of the internal pudendal artery, on which relies the vascular supply of the flap. After meticulous hemostasis, the flap is advanced in a V-Y fashion to the recipient site and is secured in layers. A tension free wound closure is of great importance, in order to minimize the possibility of dehiscence. Water tight closure should be achieved on the vaginal or anal mucosa to lower the risk of postoperative infections from bacterial contamination and vaginal/anal discharge. 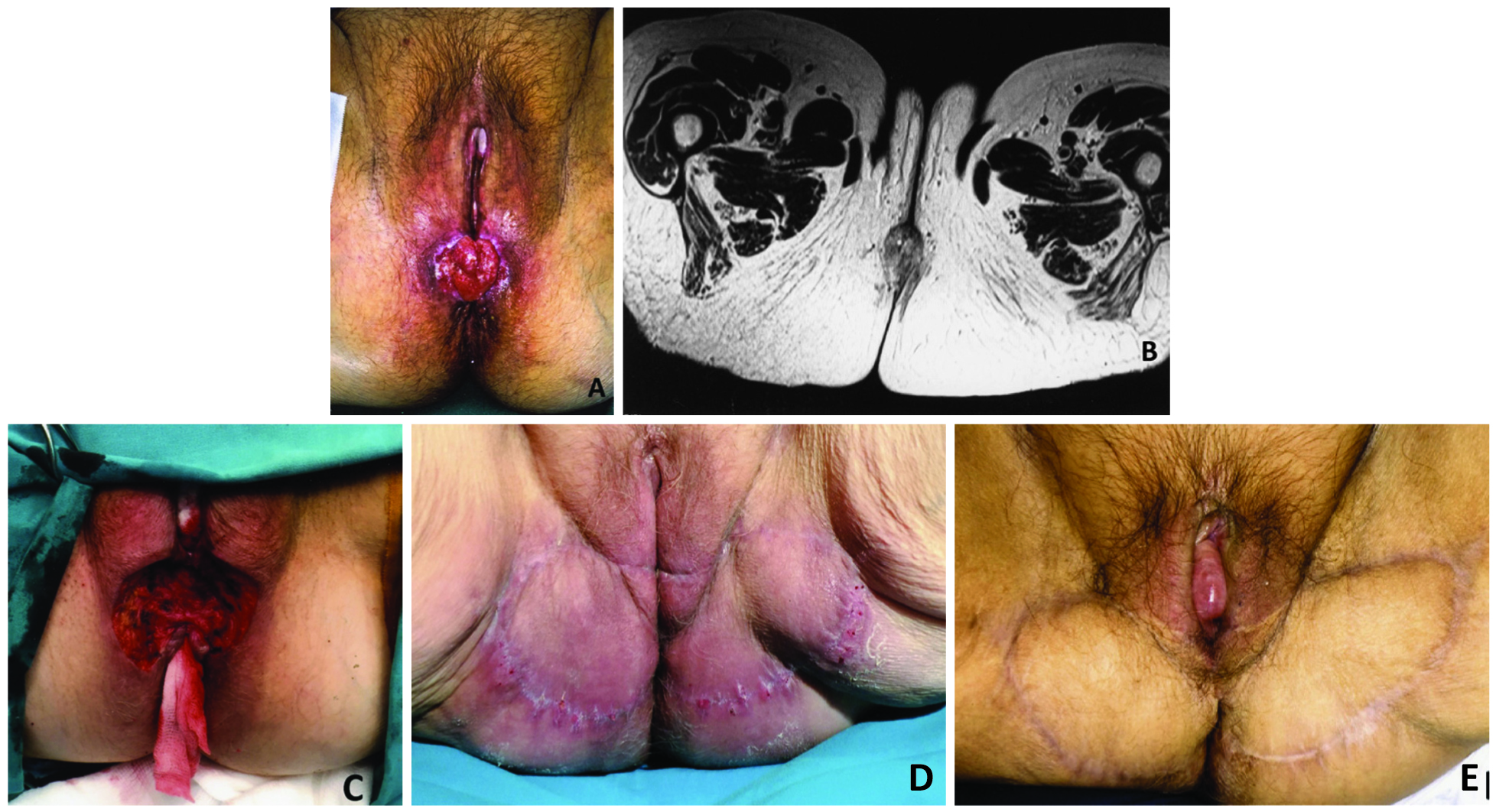 Figure 3. A ninety year old patient presented with a squamous cell carcinoma (SCC) in the perineum. A. Clinical view. B. MRI clearly showing the neoplasm. C. The defect after wide resection of the SCC. D. Postoperative result two months later. E. One year postoperatively, there is no sign of a recurrence and the result is satisfactory; a uterine prolapse is clearly visible.

Seven female patients with perineal defects necessitated reconstruction. In four patients the perineal defect extended to the vulva (Figure 3) and in three to the anus (Figure 2). Two defects were small (<2.5 × 4.0 cm) and were restored with a rotation rhomboid flap and five were moderate sized (<7.0 × 10.0 cm) and were reconstructed with bilateral medial thigh V-Y advancement flaps. The age of the patients ranged from 42 to 90 years (mean 64 years).

Patients with smaller defects had presented with benign pathology, one with ectopic endometriosis and one with a dysplastic nevus, whereas patients with larger defects had a squamous cell carcinoma (n=2) or an intraepithelial neoplasia (n=3). Postoperative follow-up ranged from 6 months to 72 months (mean 40 months).

All flaps survived without complications. There was no wound dehiscence, nor any postoperative infection. All patients had sensation on the flap. There were no incontinence or micturition problems. No patient required postoperative radiotherapy. There were no recurrences of their malignancy in any of the patients. The one patient with the ectopic endometriosis received Triptorelin (Arvekap) postoperatively. There was no sign of a recurrence four years after excision and reconstruction. The final result was functionally and aesthetically pleasing for all patients.

Rhombic (or according to others rhomboid) flaps (first described by A. Limberg in 1945) are geometric local transposition flaps with significant versatility within reconstructive surgery. They take advantage of skin laxity adjacent to the defect allowing transposition of tissue with similar characteristics to the tissue excised.10 The flap is quickly and easily designed, does not require any special instruments, and provides excellent contour, texture, thickness, color match, long-term good cosmesis and function, and high patient satisfaction,11 as it was experienced by the two patients in our small case series. We recommend its use as the preferred method for reconstructionof adipocutaneous defects of the perineum <2.5 × 4.0 cm.

Larger rotational flaps have been used for larger defects and were associated with major complications when compared to V-Y advancement flaps after oncological perineal resection and reconstruction.9 Another study, however, reported comparable overall complication rates for advancement (26.7%) and transposition (rotation) flaps (22.3%).10

A unilateral or bilateral triangular fasciocutaneous advancement flap from the medial thigh allows a valid one-stage vulvo-perineal or anal/perineal reconstruction of moderate sized defects and has been widely utilized.12,13 The vascular supply of the flap is guaranteed by the suprafascial vascular plexus originating from the superficial and deep femoral arteries.12,13 The flap is advanced in a V-Y fashion and is easily adapted and secured to the recipient site. Occasionally, multiple intercalated flaps are used for competent urethral and anal meati.11 Scarring at the donor site is limited and acceptable. The nerve supply (posterior cutaneous nerve of the thigh, pudendal nerve) guarantees acceptable sensation at the reconstruction area,12,13 as has been observed with the five patients reported here. The medial thigh V-Y advancement flap is thin, reliable, easily elevated and has matched local skin quality. Lee et al14 considered the donor site conspicuous and the mobility of the flap limited resulting in an exposed vaginal wall. They therefore modified the axis of the V-Y advancement flap from the medial thigh to the gluteal fold. The authors claimed that this flap can be advanced further because of the redundant soft tissue of the gluteal fold and profuse blood supply from perforators of the internal pudendal artery. We did not observe any conspicuous donor-site scar (Figure 3E); neither did we experience any limitation in the flap motility in this small case series. However, the modification by Lee et al14 should be kept in mind if one runs into difficulties with the medial thigh design.

Perineal flap reconstruction is not without complications. Complication rate of the V-Y advancement flap has been reported from 14% to 60%.6,12,15 Wound infection, partial dehiscence, partial flap necrosis and deviation of the urinary stream were the main early complications observed by various authors. Six percent of patients had to be returned to the operating theatre for abscess drainage according to one study.16 Anal stenosis, incontinence and late disturbance in the urinary stream were noticed at follow-up by some authors in up to 30% of patients in cases of mainly perianal defects.15,17 Age seems to be a factor significantly affecting complication rate (<60 vs >60, odds ratio 0,235, 95% CI 0.073-0.754).18 Myers et al16 managed to reduce the complication rate (67% to 37%) by foregoing bolstering with synthetic mesh in cases of perineal wound reconstruction.

An interesting comparison of different modes of perineal reconstruction was performed by Tock et al.19 These authors retrospectively reviewed 61 patients who underwent reconstruction after vulvar surgery (out of a total of 179 patients operated for vulvar cancer). Three different flapswere utilized: gluteal thigh flap (GTF), rhomboid flap (RF), and V-Y flap (V-YF). Regarding postoperative complications, reoperation rates of 69%, 41% and 25% were noted in GTF, RF and V-YF group, respectively (p=0.04). Partial necrosis was the most common postoperative complication. The overall and recurrence free survival were comparable between the three groups. The authors concluded that for large defects, a V-Y flap seems to be the procedure of choice for ensuring healing without a prolonged hospital stay compared to RF and GTF, which is in accordance with the findings of the present study.

The V-Y flap, either pedicled or perforator-based, from previously used gluteal folds was used in women presenting with recurrent vulvoperineal (pre-) malignancies. Despite short-term complications in 30% of patients, all flaps (n=10) survived and healed completely.20 In 50 % of patients, radiotherapy had been administered prior to flap reuse. The authors showed that these flaps can successfully be utilized for repeated vulvoperineal reconstruction, both in nonirradiated and irradiated women.

The rhomboid flap as well as the V-Y medial thigh (or gluteal fold) flap are thin, sensate, reliable, easy to dissect, have matched skin color and texture and leave acceptable scars at the donor site, which do not affect walking, sitting, micturition or sexual intercourse. The reconstruction can be performed at the same stage as the ablative procedure and with meticulous technique the complication rate is very low. We recommend use of the rhomboid flap for small defects (<4 cm) and the V-Y flap for moderate defects (<10 cm). Although several authors have used the V-Y flap for reconstruction of full thickness (complex) defects after abdominoperineal resection, we support the notion that such cases fare better with a muscular or musculocutaneous flap. These complex defects, defined as wounds with a large volume loss in the pelvis, or where there is need for partial or total reconstruction of the vagina, require tissue that local skin flaps cannot provide. Pedicled muscle flaps (gracilis for smaller defects, vertical rectus abdominis for larger ones) or musculocutaneous flaps (the above with a skin island) fill the dead space and adequately cover such defects.21,22 Review of our experience with muscular flaps is beyond the scope of the present and will be the subject of a future study.

Perineal defects are preferably closed with a flap and not primarily. According to the literature and the findings of the review of our own patients, we can conclude that a rhomboid flap satisfactorily covers small defects, whereas perineal defects of a moderate size are best reconstructed with a medial thigh V-Y advancement flap. In selected cases, variants of the V-Y flap can also prove useful.

Conflict of interest and funding

Revisiting the effectiveness of a forgotten technique: the value of blue dye on sentinel lymph node biopsies of gynecological cancer

Laparoscopic surgery for clear cell endometrial carcinoma, is it a realistic approach?

Reconstruction of small and moderate defects of the perineum