Second trimester unruptured tubal pregnancy is rare among ectopic pregnancies. Ultrasonography is still a diagnostic modality.  Early diagnosis can avert rupture and potential mortality and morbidity. We report a case of a woman presented to our department with abdominal pain, vaginal spotting and three-months amenorrhea. Transvaginal ultra-sonography showed a gestational sac in left adnexa, with a live 13-weeks fetus. Exploratory laparotomy and left sided salpingectomy was performed. Patient’s post-operative course was uneventful. Our case demonstrates that ectopic pregnancy may be diagnosed in advanced gestational age, making emergency surgical management the choice of treatment in most of the patients.

Ectopic pregnancy is defined as a conceptus implanting outside the uterine endometrium. The most common implantation site is within the fallopian tube (95.5%), followed by ovarian (3.2%) and abdominal (1.3%) sites1. Most of the tubal ectopic pregnancies rupture between 5-11 weeks of gestation. However, in extremely rare conditions they may be carried up to an advanced gestational age2. In this paper we report a case of unruptured tubal pregnancy with live fetus at 13th week of gestation and patient’s management.

A 28-year old nulliparous Congolese refugee woman attended to our department with lower abdominal pain progressively worsen the last five days and vaginal spotting since 24 hours. Medical history revealed a period of amenorrhea of three months, before which her menstrual cycle was normal with regular flow.
The vital signs of the patient were stable. Abdominal examination revealed mild tenderness over the lower abdomen. Bimanual examination revealed slightly enlarged uterus and a left adnexal mass.
Transvaginal ultra-sonography (TVS) showed an empty uterine cavity with an endometrial thickness of 15mm. A gestational sac was identified in the left adnexa,  hosting a viable fetus with visible heartbeats. The Crown-rump length (CRL) measured 6,5cm, which corresponded to 13 weeks. Minimal free fluid was seen in pouch of Douglas. Thus, the diagnosis of ectopic pregnancy was confirmed.
The patient was admitted to hospital. All laboratory results were unremarkable. After obtaining informed consent, the patient underwent an exploratory laparotomy. Intraoperatively, we identified an unruptured left tubal ectopic pregnancy and a small amount of free serous/bloody fluid, while both ovaries and the right tube were normal (Figure 1). Left salpingectomy was done, the peritoneal cavity was washed repeatedly with warm normal saline and the abdomen was closed in layers. The specimen was sent for histopathological examination, which confirmed our diagnosis (Figure 2).
The postoperative period was uneventful and the patient was discharged four days after the surgery. 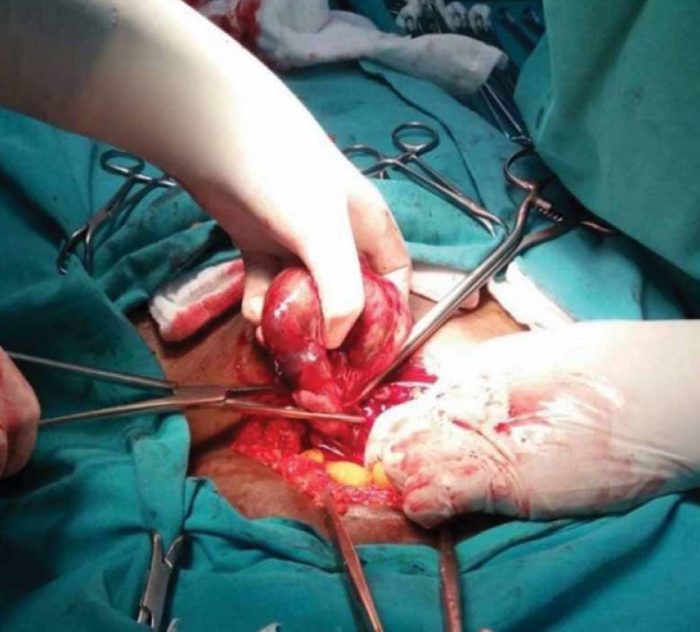 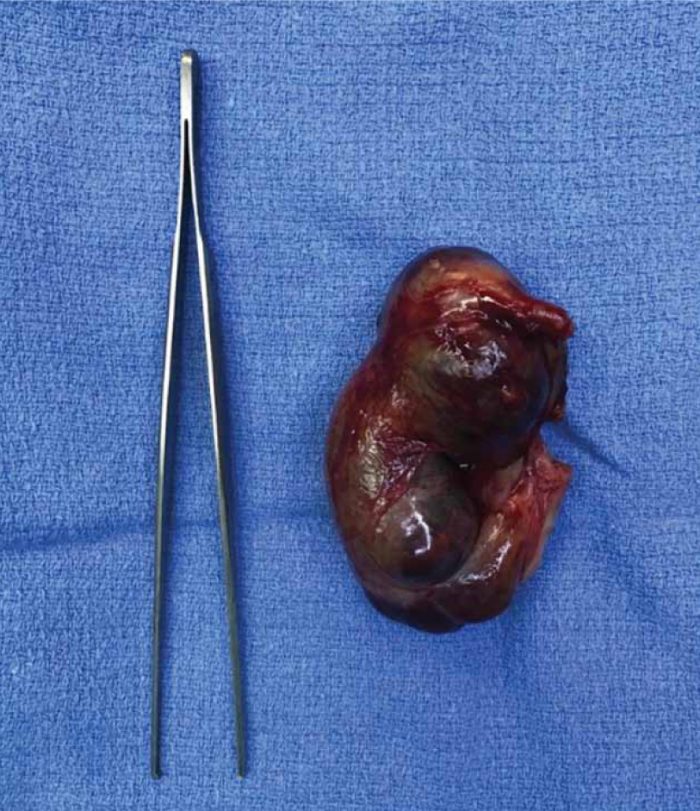 Ectopic pregnancies account for 3–4% of pregnancy-related deaths2, with the conceptus usually implanting in the fallopian tube.  Routine sonographic examination is imperative in the first trimester of the pregnancy to find out patients with ectopic pregnancy3. Early diagnosis of ectopic pregnancy can avert potential rupture, bleeding and shock. In rare conditions, ectopic pregnancies progress into second trimester, remaining asymptomatic, making diagnosis a challenging problem for physicians.
According to the literature, there are different clinical manifestations of advanced tubal pregnancies. Zacharis et al reported a woman pregnant to a 13-week viable fetus, who attended to the emergency department with acute abdomen and hemodynamic instability, due to ruptured tubal pregnancy4. On the other hand, in our case the patient presented with viable ectopic pregnancy of 13 weeks in an unruptured gestational sac. Because of the high incidence of maternal morbidity and mortality, emergency laparotomy was the only treatment option in both cases. The different surgical techniques performed in each patient depend on the implantation site and the size of the ruptured or unruptured ectopic mass. In such types of large ectopic pregnancy and excessive deformation of fallopian tube, it is difficult to perform conservative surgery, despite the patient’s desire for future child bearing2.

Our findings confirm that ectopic pregnancy may be carried up to an advanced gestational age, in the absence of classical symptoms of ectopic pregnancy compounded by incomplete patient assessment. Late diagnosis always leads in emergency total salpingectomy due to excessive deformation of the fallopian tube and highlights the importance of patients’ health education and proper antenatal care.