The abdominal wall is the most common position locating endometriosis. The presentation of the event concerning the occurrence of endometriosis in scar of laparotomy after cesarean section. A patient, four years after cesarean section performed with Pfannestiel, came to our outpatient clinic with abdominal pain primary located in the left end of the surgical scar. Based on history and clinical findings was the suspected endometriosis of the abdominal wall and decided that surgical exploration of the disease. Intraoperatively was found hard clumps, a surface of which was solid adherent to the fascia of the abdominal muscles without good infiltration of the muscular wall. Histological examination of surgical preparation confirmed diagnosis of endometriosis in the abdominal wall with fresh bleeding and old data. In this work, after the description of the incident by the systematic arrangement and processing of modern references attempted a brief review of this rare localization of the disease, regarding the pathogenesis, diagnosis, treatment and prognosis.

Endometriosis first described by Rokitansky in 1860. It is a non – invasive neoplastic disease of the reproductive age of women, characterized by the presence and development of functional endometrial tissue outside of the normal anatomical limits of the uterus. The incidence of the disease is not easy to determine with precision. Overall, it is estimated that affects about 1% – 2% of women of reproductive age, approximately 40% – 60% of women with dysmenorrhea and 15% – 25% of infertile women1. Endometriosis is usually located in the bowels of pelvic and peritoneum. More rarely, it is possible to find and except pelvis spot disease in every tissue and organ in the female body, including laparotomy scar, episiotomy scar, navel, vagina, urinary, gastrointestinal, respiratory, central nervous system, and other2.

Patient 28 years old came to our clinic outpatient clinic with abdominal pain primary located in the left iliac fossa. The patient described the symptom from four years, about four months after performing caesarean section. Over time reported deterioration of its situation especially during the days of menstruation, when describing pain intensity greater while felt painful swelling of the skin in the area of the fault. The information received from the obstetrical history attesting to perform caesarean section Pfannestiel without postoperative complications. The medical history was free. By the clinical examination was found palpable painful induration at the left end of the surgical scar. After ultrasound of upper and lower abdomen there were no findings suggestive of intra-abdominal disease. The CT scan was without pathological findings. The levels of cancer antigen Ca125 were within normal limits. 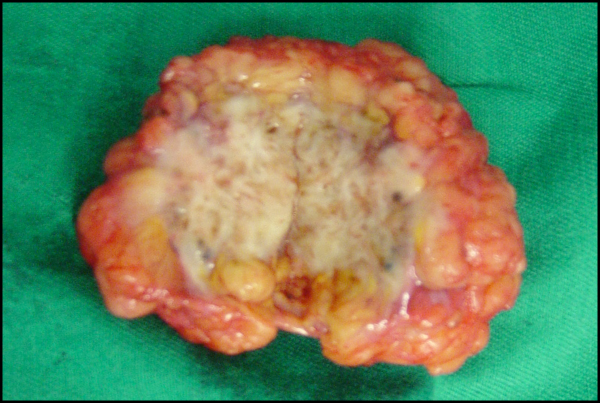 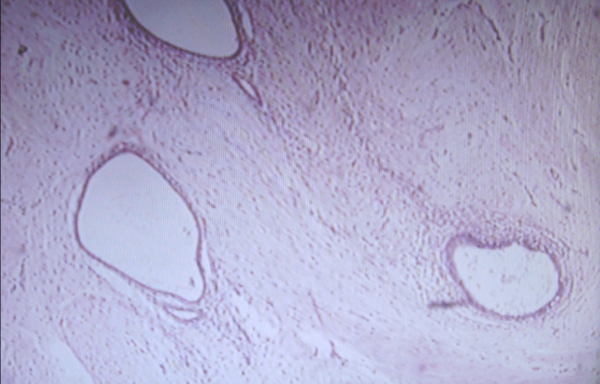 The abdominal wall is the most common place of development of ectopic endometriosis tissue. The lesion usually relates to the subcutaneous tissue, while rarely possible to expand the fascia abdominal muscles and muscle wall3. Although the literature cases automatic event reported the disease without prior open or laparoscopic surgery4, in most cases endometriosis of the abdominal wall is iatrogenic and related to previous surgery scar that requires the opening of the uterine cavity. The most important predisposing factor for the development of ectopic endometriosis tissue in the abdominal wall by the foregoing hysterectomy in pregnant women. Especially the destructible early pregnancy seems predisposed to implant the surgical scar. Generally, the frequency of development of the disease is estimated to be higher after uterine incision for terminating a pregnancy than after cesarean section. More specifically, after uterine incision to address second trimester abortion calculated terms in 1.08% of cases, and after cesarean 0.03% – 0.04%5. Recently, Chang and his colleagues showed that after cesarean section scar endometriosis in the laparotomy  scar is related to 0.03% – 0.47% of cases, while the average period until onset of symptoms is estimated to be 39.3 months.6 Moreover, various gynecological surgeries open or laparoscopic access, and rarely amniocentesis (Table 1) included in predisposing factors have been implicated in endometriosis  of abdominal wall7,8.

The diagnosis of endometriosis in surgical scars is not easy and often arises late. The symptoms are not specific and frequently appear after months or years after surgery. Usually displayed a slowly growing painful palpable mass in the scar area which may increase in size and become more painful during menstruation. The pain is the predominant symptom and occurs in almost all cases. The pain, though classically described as a periodic but by recent bibliographical almost half patients do not exhibit periodicity in pain9. Pain during menstruation may even get the form acute abdomen10. Severe pain may be the result of autonomous functional ectopic endometrial tissue with sensory nerves that contributes not only to a worsening of symptoms, but also in maintaining ectopic development11. The difficulty and delay diagnosis mainly due to scarcity of the disease, but also to a wide range of pathological conditions (Table 2) to be included in the differential diagnosis of endometriosis  of the abdominal wall12.

Although the diagnosis preoperatively based strictly on history and clinical examination should not be denied the utility of laboratory tests and of modern imaging and interventional diagnostics (Table 3). The use today of serological markers, in addition to the early detection enables the proper postoperative monitoring, monitoring of disease response to the medication and to prevent possible recurrence or malignancy of the lesion. The more meaningful indicator is the cancer antigen 125 (Ca125), increase of which more than 1000 UI / ml may indicate the existence of invasive disease13. The diagnostic value of the Ca125 the early stages of endometriosis is very low, with specificity of between 83% – 93% and sensitivity starts at only 24% (24% – 94%)14. Recently, in the attempt to increase the diagnostic value of the Ca125 appear to contribute significantly and the concomitant use of other serological markers, such as cancer antigen 19 – 9 ­­(Ca19 – 9)15, cancer antigen 15 – 3 (Ca15 – 3)16, various cytokines (IL – 6, TNF – a)17, P45014 aromatase14 and vascular endothelial growth factor (Vascular Endothelial Growth Factor – VEGF)18,19.

Ultrasound examination seems to be a useful but non-specific diagnostic method. With transabdominal ultrasound can been detected in the abdominal wall, the ultrasonographic characteristics which include a infrasound heterogeneous structure with internal echogenic echoes with irregular margins, often infiltrating the adjacent tissues20. Although ultrasound check cannot detect the peritoneal endomitriosical implants, the use of transvaginal sonography today is useful in investigation of pelvic structures, to determine the coexistence of pelvic desease21. With earlier study by Wolff and colleagues showed that 25% of women with endometriosis in laparotomy scar after cesarean section coexisted a pelvic desease22. Computed tomography and particularly magnetic resonance imaging outweigh ultrasound as it is able to provide valuable information on the location, depth, extent of damage and the possible infiltration of adjacent tissues from ectopic endomitriosic area23,24.

Unlike imaging, the aspiration biopsy with thin needle (Fine Needle Aspiration – FNA) can be a valuable and reliable diagnostic tool in the investigation of palpable masses in the abdominal wall. The method can distinguish ectopic endometrium from other pathologies included in the differential diagnosis of endometriosis of the abdominal wall and contribute to timely and accurate preoperative diagnosis, in order to achieve the most appropriate therapeutic approach design desease25 .

The prognosis of endometriosis of the abdominal wall is usually good. Immediately after surgery most patients report relief of their symptoms. Postoperative monitoring to determine Ca125 is necessary. The Ca125 a recurrence rate of the disease, and malignancy, as reported in the international literature incipient tumor masses endomitriosic origin in surgical scars after gynecological surgeries or caesarean29,30.

Endometriosis of the abdominal wall is generally iatrogenic. It is a rare form extra pelvic endometriosis in the differential diagnosis which should include all the painful masses in the abdominal wall. The cyclical changes, the progressive increase in the size of the lesion and a range of modern serological and imaging now permit early detection and the proper selection of the most appropriate therapeutic manipulations in order to minimize the risk of recurrence and to prevent malignant transformation of the disease.